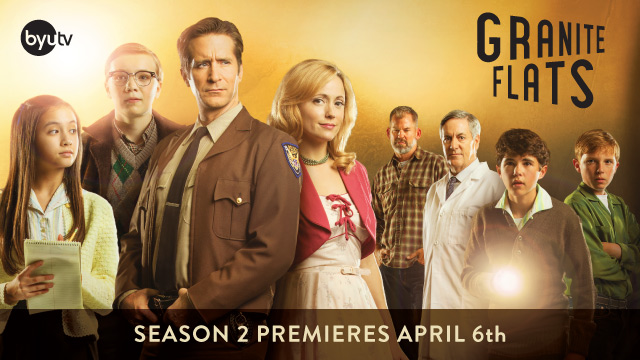 For many viewers, it will be a case of twooo wuv.

Cary Elwes, who played Westley in the 1980s cult classic The Princess Bride, has signed on to a four-episode story arc on the Mormon-run series Granite Flats, which debuted last April as the first-ever original series on BYUtv.

Christopher Lloyd, who played Doc in Back to the Future, is also going to be a regular on the family-friendly sci-fi drama, playing a local schoolteacher.

The addition of those two actors to the show’s second outing should help raise the drama’s profile after a commercially successful, eight-episode opening season. Veteran critic Rick Ellis of TV Examiner said he was pleasantly surprised last year by the quality of the series:

[It] has a surprising amount of depth for viewers accustomed to the cookie-cutter feel-good stories seen on former broadcast shows such as “Touched By An Angel.” As the backstories of the characters are revealed, their underlying motives offer up some meaty subtext.

There are a lot of unexpected moments in the first two episodes and while the show isn’t perfect, it may be the best family-oriented drama on TV right now. The acting is uneven at times and there is a tendency to have the characters explain out loud what their motivation is or what they’re thinking.

But there are so many great things about “Granite Flats” that it’s easy to overlook the problems. The show has emotional depth and it does a solid job of capturing the life of a small military town in the days of the Cold War. BYUtv ordered eight episodes of the series, but with any luck it will be successful enough to inspire not only more episodes, but other scripted shows at the network.

If nothing else, “Granite Flats” will remind viewers that “family-friendly” programming doesn’t have to be painfully earnest and terribly boring.

I missed the first season of Granite Flats, but this time I will definitely give it a try.