PEARLAND, Texas (RNS) Carlos Lopez works in the United States to earn money and send it back home to his family in Mexico. But he sends back something else, too: pamphlets and personal testimonies about his new faith.

On Dec. 22, 2013, Lopez took the “shahada” — the profession of the Islamic faith — and joined the ranks of what the American Muslim Council estimates is a 200,000 strong Hispanic Muslim community across the U.S. 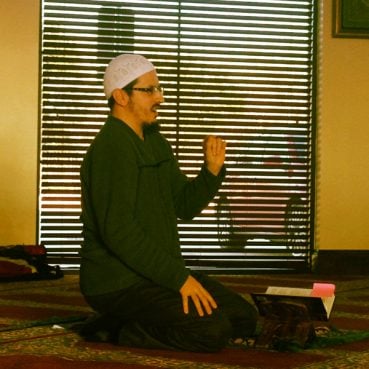 Unlike previous generations of Hispanic Muslims who were attracted to the faith by their own spiritual explorations, Lopez and many others like him are converting as a result of targeted Islamic outreach efforts.

This new form of Islamic “da’wah,” or outreach, aims to translate being Muslim into the Spanish cultural and linguistic vernacular.

“To reach Hispanics, we have to be practical,” said Imam Daniel Abdullah Hernandez who teaches an Islam in Spanish course in Pearland, Texas, where Lopez converted. “Islam is practical, it’s social, it’s very easy to translate it into Hispanic culture, and it’s even easier to communicate it in the Spanish language.”

Hernandez teaches interested Hispanics about the basics of Islam in addition to specific elements he and others believe are important for Hispanic seekers. These topics include links between Hispanic culture and Islam, social issues such as taking care of the poor, family dynamics and differences and similarities with the Roman Catholic faith.

“Many Latinos do not know about Andalusian Spain when Islam gave birth to much of what we know as Hispanic culture today, including over 3,000 Spanish words,” said Hernandez. “We are opening their eyes to how being Latino and Muslim makes perfect sense.”

Islam in Spanish reports an increasing number of Hispanics convert as a direct result of their targeted outreach.

Still, according to the Pew Research Center, just 4 percent of Muslim Americans are of Hispanic ancestry, though one of 10 native-born U.S. Muslims are Hispanic. “The American Mosque 2011” report said the number of Latino converts has been steadily increasing since 2000, more so than any other racial or ethnic group.

As they convert, many face ostracism from their families who are predominantly Christian, often Catholic, and feel the converts are abandoning their Hispanic identity. Likewise, many Hispanic Muslims do not find a ready welcome in masjids that are largely made up of Middle Eastern, North African, South East Asian and African-American Muslims.

“My conversion was a shock for my family; they thought I rejected Jesus, Mary, my culture,” said Imam Isa Parada, one of the leaders of Islam In Spanish. “My dad thought I was going to be a terrorist.”

Likewise, Parada found the Islamic faith community did not know how to deal with Hispanics and lacked resources for Spanish-speaking converts.

Islam In Spanish is not the first organization to focus its efforts on reaching Hispanics. Another group, the Latino American Dawah Organization, existed before it and paved the way.

Shafiq Alvarado helped found LADO, which offers help and support to new Hispanic Muslims. Born into a Catholic family and of Dominican ancestry, Alvarado converted when he was 25 through the efforts of Allianza Islamica (Islamic Alliance) in New York City.

Commenting on the importance of Latino-specific outreach and organizations, Alvarado said, “We have to know who our audience is in order to explain Islam to them, and Latinos are a diverse group.”

To reach Hispanics, LADO is translating Islamic materials into Spanish and disseminating that information in new ways.

Lopez and two other men converted in the Houston area at such an event. Now, all three are learning Arabic, taking part in daily prayers and looking forward to sharing their religion with family back in Mexico, Puerto Rico and elsewhere.

“People who become Muslims inevitably become ambassadors for Islam,” said Alvarado. “Hispanic Muslims are not sitting on the sidelines; they learn Arabic, the Quran, Islamic jurisprudence, and many other things to take that knowledge and give it back to their communities, their families,” he said.

Lopez is no different. Although he has been Muslim for just two months, he said he plans on helping his family with the newfound spiritual and social insight he found in Islam.

“As soon as I converted to Islam,” he said, “I wanted to share with my family in Mexico, so they could do the same.”