NEW YORK (RNS) Atheists are challenging plans to include a 17-foot, cross-shaped beam that became a famous symbol of Ground Zero after 9/11 in a display at the national memorial museum that is scheduled to open this spring. 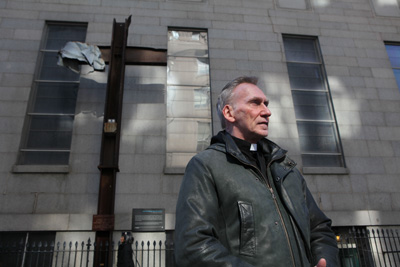 A cross formed from a fallen steel I-beam at the former World Trade Center towers was placed outside St. Peter’s Catholic Church in Lower Manhattan, where the Rev. Kevin Madigan kept watch over it until its pending move to the National September 11 Memorial & Museum. Photo by John Munson/The Star-Ledger

In arguments before the the 2nd U.S. Circuit Court of Appeals on Thursday (March 6), American Atheists’ lawyer Edwin Kagin said the cross should go back to St. Peter’s Catholic Church, where it spent some time on display, not in a museum built with a mix of public and private funds.

Last year, a lower court rejected a lawsuit filed in 2011by the New Jersey-based American Atheists that said the cross was an unconstitutional establishment of religion.

In his appeal, Kagin said his organization is seeking a similar object to be displayed at the museum, something like a plaque that would say “atheists died here, too.”

“We’re arguing for equal treatment in some way, whatever that might be,” Kagin said after the hearing.

Questions raised by the three-judge panel included whether similar treatment would be needed in a place like the Holocaust Museum, a museum that includes Jewish artifacts but would not be considered an endorsement of Judaism.

The beam was found by rescue workers two days after the terrorist attacks, and it is scheduled to be displayed among 1,000 artifacts in a 100,000-square-foot underground museum. Mark Alcott, a lawyer representing the National September 11 Memorial & Museum, said the artifacts all come from the days surrounding 9/11.

“The museum is a display of history,” Alcott said after the hearing. “Religion was a very important part of it, in this case.”

In his argument for American Atheists, Kagin suggested that the cross became a form of worship for many. American Atheists President David Silverman has previously called it a “working Christian shrine.”

“We’re worried about the alienation of atheists,” he said. “We’re deeply concerned this cross gives one story, and that’s for Christians.”

Raggi also asked Alcott why an object couldn’t be added for atheists. “There’s no constitutional requirement the cross has to be balanced by something else,” Alcott responded. “The museum is not a proponent or opponent of religion.”

Last month, the Becket Fund for Religious Liberty filed an amicus brief in defense of the museum’s right to display religious objects in its private exhibit and challenging American Atheists’ right to sue in the first place.

Construction worker Frank Silecchia discovered the beam In the smoldering wreckage of the World Trade Center towers. Silecchia told the Today Show that the cross comforted him, and it soon became a rallying point for first responders. “I was already working 12 hours. I was quite weary and the cross comforted me,” Silecchia said.

“I never stood here before any media and said it’s about religion,” Silecchia said. “But I say it’s about faith — the faith that was crushed on 9/11.”

A decision from the Court of Appeals could take several months.