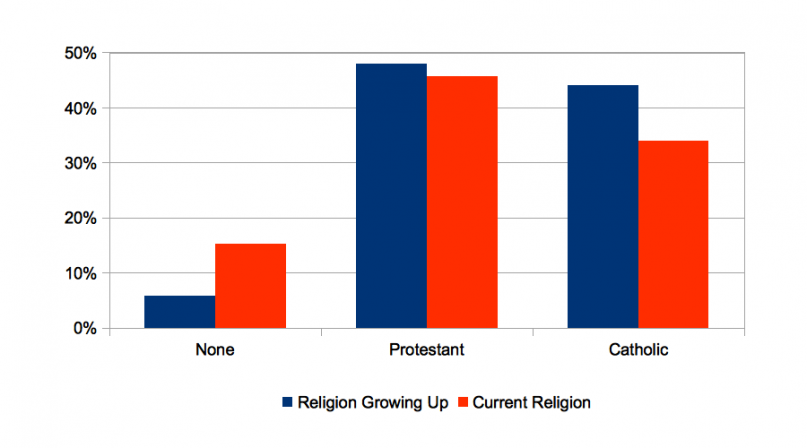 Many Irish-Americans, particularly in the South, are evangelicals. In fact, Michael P. Carroll, a dean at Wilfrid Laurier University in Canada, reports that Irish-Americans make up a larger share of evangelicals in the South (20 percent) than their share of Catholicism elsewhere (16 percent). That’s right—a Southern Baptist is more likely to be Irish than is a Catholic.

The link between being Irish and being Catholic remains strong in the American imagination. To be really Irish is to be Catholic. To give one trivial example, the University of Notre Dame football team was called ‘Fighting Irish’ because ‘Fighting Irish’ was used interchangeably with the school’s other early nickname, ‘Fighting Catholics’. The school, which is officially named L’Université de Notre Dame du Lac, was founded by French priests, not Irish, but the name Fighting Irish stuck.

This conflation of Irish and Catholic identities is, in part, bigotry. The Irish immigrants in the 1840s and 1850s were a threat to Protestant America. Earlier immigrants from Ireland who were Protestant were viewed as not truly Irish. They were ‘Scotch-Irish’, which meant that they were really of ‘Anglo-Saxon’ stock, not the ‘savage’ Irish race. Carroll points out, however, that these so-called Scotch-Irish were fully Irish, just ones with loose ties to the Presbyterian church. Many left the Presbyterian church and became Methodist or Baptist. There were also many Catholics in pre-Famine America who converted to Protestantism.

Carroll concludes that being Irish in America has two different meanings today. For Catholics, the link between being Catholic and being Irish is now entrenched, with Irish Catholics often viewed as being devout. “Claiming an Irish identity can function for Catholic Americans as a way of presenting themselves to others as a good Catholic,” Carroll said.

For Protestants, however, being Irish is a link back to ‘Scotch-Irish’ roots that go back to the 1700’s. It is an ethnicity associated with individualism, evangelicalism, and determination. “Claiming an Irish identity today is a way for Protestant Americans to associate themselves with the values of the American Revolution, or, if you will, is a way of using ethnicity to be American,” Carroll concluded.

For both Protestants and Catholics, being Irish is something to be proud of. This is one reason why so many Americans claim to be Irish, even if only part of their ancestry is Irish.  According to the General Social Survey, roughly one-in-eight Americans say that their primary ancestry is Irish. This Irish diaspora in America is large. According to the General Social Survey, 12 percent of Americans or over 36 million people claim to have an Irish ancestry. This is six times more than the current population of the Emerald Isle (there are 4.6 million people in the Republic of Ireland and another 1.8 million in Northern Ireland). This large number of Irish in America is far more than would be expected to occur from the four million Irish immigrants. Sociologists Michael Hout and Joshua Goldstein found that one reason is preference. Put simply: Americans like to think of themselves as being Irish, even if what it means to be Irish is not the same for everyone.