(RNS) The developer who sparked a firestorm in 2010 when he proposed to build a community center with an Islamic prayer room two blocks from Ground Zero announced this week that he plans to turn the property at 45-51 Park Place into a museum of Islamic culture. 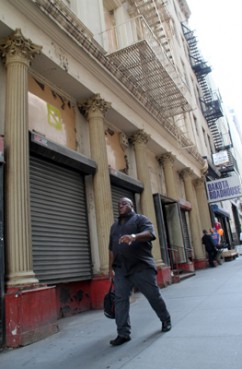 A man walks past the site of the proposed Park51 Islamic community center and mosque in lower Manhattan. Religion News Service file photo by Gregory A. Shemitz

A spokesman for the developer, Sharif El-Gamal, told The New York Times that the proposed museum would be three stories high and 5,000 square feet, much smaller than the proposed community center, which was slated to be 15 stories tall and include a swimming pool, basketball court, auditorium, classrooms, and cafe, as well as other attractions.

El-Gamal ran into difficulties finding financing for the community center project, even though the project won the support of former Mayor Michael Bloomberg, several 9/11 families, and many Muslim, Christian, and Jewish leaders. It languished after becoming the target of criticism from right-wing groups, anti-Muslim activists, and several other 9/11 families.

The museum project has already come under fire by anti-Muslim bloggers Pamela Geller and Robert Spencer, who vigorously fought the community center.

“Clearly this is more nonsense and denial at a time when millions across the world are suffering under the boot of sharia,” wrote Geller on her Atlas Shrugs blog.

El-Gamal, whose projects include the redevelopment of the Garment Center Congregation, a synagogue in Times Square, filed plans this month to demolish the Park Place properties, and has hired French architect Jean Nouvel, winner of the 2008 Pritzker Prize.