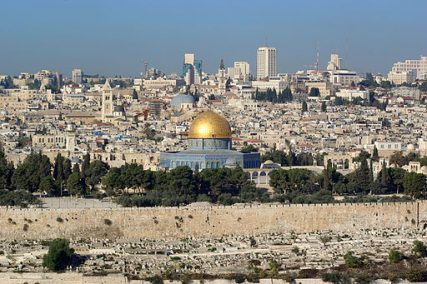 A view of Jerusalem.

JERUSALEM (RNS) Ahead of Pope Francis’ Holy Land visit, the heads of Christian churches in the region plan to launch an international awareness campaign following a series of anti-Christian vandalism believed to have been carried out by Jewish extremists.

News of the campaign, which was announced on the website of the Latin Patriarchate of Jerusalem Wednesday (May 7), comes weeks before the pope’s May 25-26 visit to Israel and the West Bank.

The announcement was spurred by what the patriarchate called a “wave of fanaticism and intimidation” against local Christians and institutions.

On Friday, graffiti declaring “King David is for the Jews, Jesus is garbage” was discovered scrawled on a wall opposite a Jerusalem church. Four days earlier, a Catholic official discovered that the words “Death to Arabs, Christians and all those who hate Israel” had been spray-painted in Hebrew on a column in front of the Office of the Assembly of Bishops at Jerusalem’s Notre Dame Center. The words were topped by a Star of David.

“We do not doubt the willingness of the State of Israel to finish with these acts which don’t serve the image of Israel,” said Auxiliary Bishop William Shomali of the Latin Patriarchate in Jerusalem. “But efforts failed and acts of vandalism continue increasing.”

Police officials say they are doing what they can to prevent these attacks, something church officials dispute.

“A new strategy is needed,” said Shomali. “Let us not forget that the kind of education received by these people prepares them to do similar acts. We have to improve the educational side if we want to avoid the repetition of such acts on the long-term period.”

During a visit to a mosque in the Arab village of Fureidis on May 1, Israeli Security Minister Yitzhak Aharonovitch called the recent attacks “hate crimes” and vowed to make arrests in the coming days.

On Sunday night, 40 organizations, including many Jewish ones, will hold a protest against the vandalism.