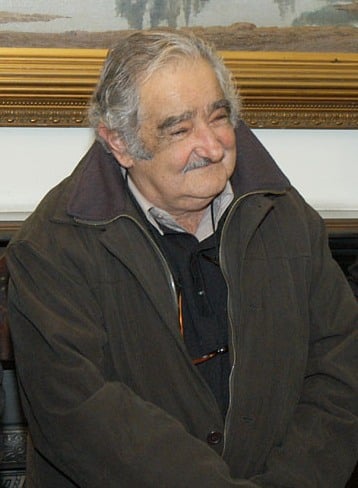 Following a televised interview,Uruguay’s President José Mujica has been the talk of Spain.

According to the BBC, more than 100,000 tweets have been issued using the hashtag #UnPresidenteDiferente (“a different president”) in the last few days, with users comparing Mujica against their own Prime Minister.

But some Twitter users in Spain have been drawing an even more interesting comparison—and a more controversial one. Per the BBC:

Some using the hashtag have even been comparing Uruguay’s president with the Pope—himself quite a social media star. But there’s at least one big difference. In his interview on Spanish TV, President Mujica declared himself an atheist.

Why are people drawing a parallel between Mujica, an atheist, and Pope Francis?

Francis has received a great deal of attention for shirking many of the privileges of his position, shocking many by opting for more humble accommodations and transportation. His words on wealth inequality—he has said, for example, that “inequality is the root of social evil”—have stirred controversy. Some have called Francis a “radical” due to many of his more progressive views and his simple lifestyle.

Similarly Mujica, who has been called the “world’s poorest president,” declined to live in the “luxurious house” offered by the government, instead residing at his wife's humble farm on a dirt road without running water. He donates about 90 percent of his salary to charities benefiting the poor, meaning his income is on par with the average Uruguayan salary. His personal wealth declaration in 2010 was $1,800—which is the value of the well-worn 1987 Volkswagen Beetle he drives.

But his minimalist lifestyle isn’t just about what he’s grown accustomed to—it’s also about living in a way that is consistent with his values.

“Does this planet have enough resources so seven or eight billion can have the same level of consumption and waste that today is seen in rich societies? It is this level of hyper-consumption that is harming our planet,” he said in 2012.

The parallel between Mujica and Francis is surely a limited one—there are obvious, important differences between them—but it does offer us an opportunity to recognize that humility, generosity, and living in a way that is consistent with one’s values isn’t limited to high profile religious leaders. And by openly stating his atheism, Mujica—the "world's poorest president," who donates 90 percent of his salary to charity—counters the false claim that religion has a monopoly on morality.

Perhaps the comparison can even help improve the state of dialogue between atheists and Catholics. Francis has made waves for vocally pursuing an “open dialogue free of prejudices” with atheists. Based on the views of Twitter users in Spain, it seems I’m not the only one who thinks Mujica and Francis would make great dialogue partners.

RNS, a nonprofit news agency dedicated to covering religion and atheism, needs your help. If you appreciate my posts and want a signed copy of my book Faitheist, please consider a donation so RNS can meet its fundraising goal by Friday.