(RNS) North Dakota on Friday (June 6) became the last of 31 states to have its ban on same-sex marriage challenged as unconstitutional. 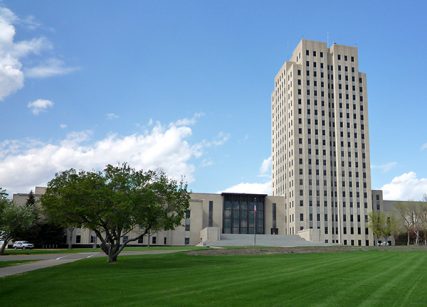 The lawsuit was filed hours before a federal judge in Wisconsin struck down a similar ban in Wisconsin.

In North Dakota, seven couples filed suit in federal court, arguing that the 2004 voter-approved constitutional amendment — which limits marriage to heterosexuals — violates the equal-protection and due-process guarantees of the U.S. Constitution. The suit additionally says the state must recognize marriages of same-sex couples who wed in other states, the so-called “right to travel” also outlined in the 14th Amendment.

Since the June 2013 U.S. Supreme Court decision striking down the section of the federal Defense of Marriage Act that defined marriage as between a man and a woman, judges nationwide have nullified several such bans.

North Dakota Attorney General Wayne Stenehjem’s office said it could not comment on the specifics of the challenge because it had not yet seen the lawsuit.

“It is important to remember, however, that it is the constitutional duty of the attorney general to represent the state when it is sued,” Stenehjem said in a statement. “Ultimately, only the Supreme Court can determine whether North Dakota’s enactment is constitutional or not.”

The North Dakota Family Alliance, which campaigned for the marriage amendment, also had not seen the suit Friday afternoon but plans to defend the measure, executive director Tom Freier said. He said his group would likely coordinate with the attorney general and file a friend-of-the-court brief.

In a statement, Freier said the alliance “will stand on the North Dakota constitution and with the 73% of the people who voted in 2004 to permanently place a definition of marriage in our constitution.

“For centuries marriage between one man and one woman has served as the foundation for the family and society and has demonstrated its benefit for the well-being of children. It must be defended and preserved.”

The lawsuit was filed by Josh Newville, a Minneapolis attorney who also went to court in South Dakota on behalf of six same-sex couples.

“Same-sex couples are identical to different-sex couples in all characteristics relevant to marriage,” the suit states. “Without any legitimate governmental interest, North Dakota has targeted a minority of individuals for discrimination on the basis of sexual orientation.

“The state will incur little to no burden in allowing same-sex couples to marry and in recognizing the lawful marriages of same-sex couples from other jurisdictions on the same terms as different-sex couples,” the suit continues, adding that the couples are subject to “an irreparable denial of their constitutional rights.”

Same-sex couples can now marry in 19 states and the District of Columbia, and legal challenges have frozen prohibitions in other states during appeals. Freedom to Marry, which had led the campaign for marriage equality, is tracking the litigation.