BALTIMORE (RNS) Pushing back against a cultural tide of growing acceptance of transgender people, Southern Baptists adopted a statement affirming the creation of “two distinct and complementary sexes.” 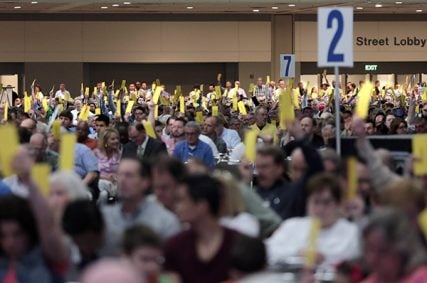 Thousands of Southern Baptist Convention delegates voted on a new president and several resolutions at their meeting on June 10, 2014. Photo by Van Payne via Baptist Press

The resolution was passed overwhelmingly Tuesday (June 10) as some 5,000 people attended the annual meeting of the nation’s largest Protestant denomination and elected as president the Rev. Ronnie Floyd, pastor of a northwest Arkansas megachurch.

The delegates, known as “messengers,” affirmed “God’s good design that gender identity is determined by biological sex and not by one’s self-perception.”

They added that they had compassion for people with gender conflicts, called them “image-bearers of Almighty God” and condemned “acts of abuse or bullying committed against them.”

But they went on the record to oppose gender assignment surgery and cross-sex hormone therapies. They expressed their hope that transgender people would “experience renewal” through a faith in Jesus.

Ross Murray, who runs the religion program at the LGBT advocacy organization GLAAD, criticized the statement for being inconsistent.

“They want to both welcome people in and yet do not want to recognize them as a full person and probably even more fully as a child of God,” he said. “The Southern Baptist Convention is so much missing out on the opportunity to connect with another part of God’s creation.”

In another cultural pushback, Baptists affirmed “the sufficiency of Scripture regarding the afterlife” and criticized best-selling movies and books that have focused on heaven and suggested descriptions of it.

“Many of these books and movies have sought to describe heaven from a subjective, experiential source, mainly via personal testimonies that cannot be corroborated,” they said.

In the same session where the resolution was passed, a messenger asked that “Heaven Is for Real” be removed “for theological reasons” from LifeWay Christian Stores, which are affiliated with the SBC. The request was ruled out of order.

The Baptists, whose denomination was founded by supporters of slave-owning missionaries, passed another statement marking the 50th anniversary of enactment of the Civil Rights Act.

It said they “lament and repudiate this nation’s long history of racial segregation as well as the complicity of Southern Baptists who resisted or opposed the dismantling of the evil of racial hierarchy in our churches or society.”

Yet another resolution affirmed their opposition to government sponsorship of casinos and lotteries and asked Americans of all religious and political convictions to join in a call to end the practice, which they say has amounted to “corrupt deals” and “broken dreams.”

They also rejected predatory payday lending, calling those who are engaged in it to “consider the great damage they are causing in the lives of vulnerable people and to adopt a just lending model.”

The Baptists suggested churches and employers should provide other ways to solve short-term financial problems in their communities, including financial stewardship classes.