The National Organization for Marriage hosted its 2013 March for Marriage in front of the U.S. Supreme Court on March 26.

WASHINGTON (RNS) Facing a string of losses in the courts and in public opinion, supporters of traditional marriage between one man and one woman will rally in the nation’s capital next week, with some activists conceding that they face an uphill fight.

Planners of the second annual March for Marriage on Thursday (June 19), led by the National Organization for Marriage, hope to bring thousands of supporters to march from the U.S. Capitol to the Supreme Court.

Chris Plante, the Rhode Island director for the National Organization for Marriage, said that it’s “become clear that marriage is under attack” — by “elites,” the media and an “out-of-control judiciary.”

Plante said the idea that same-sex marriage is inevitable is a “false narrative.” He pointed to a Politico poll that found 52 percent of respondents oppose gay marriage, but the poll was not national and only surveyed “likely voters … in places with highly competitive midterm contests.”

A dozen other polls, including polls from Washington Post/ABC News, Public Religion Research Institute and Gallup found that a majority of Americans approve of same-sex marriage. The most recent Gallup figures show support for same-sex marriage at an all-time high, 55 percent.

The Archdiocese of Philadelphia is sending buses of marchers to Washington, and Steve Bozza, director of the archdiocese’s office for life and family, admitted his side faces “an uphill battle.” Last month, a federal judge in Pennsylvania struck down the state’s ban on gay marriage; Republican Gov. Tom Corbett decided not to challenge the ruling. This year alone, courts in 16 states have struck down gay marriage bans or said same-sex marriages from other states must be recognized.

Bozza said the fight over gay marriage goes beyond legislation or court rulings, and supporters of traditional marriage “need to proclaim the theological reasons.”

“It’s not a matter of just legislation; you have to change hearts,” Bozza said, adding that supporters “need to show strength” and that they’re not just a “fringe group of people.”

Gay rights activists say they’re not worried that the march will hurt their momentum — federal and state courts have ruled in favor of gay marriage 20 times since the U.S. Supreme Court struck down the federal ban on same-sex marriage last summer — but are nonetheless keeping an eye on the other side.

“A march like this is not going to change the national movement,” said Sharon Groves, who oversees religious outreach for the Human Rights Campaign, the nation’s largest gay right group. “But it causes real damage to people’s lives.”

Ross Murray, who runs the religion program for the LGBT advocacy group GLAAD, said the National Organization for Marriage says “extreme things” and is “driven by hostility.”

Murray joined a petition that asks Cordileone to not go to the march; the letter to Cordileone was signed by representatives of more than 80 organizations. “We respect freedom of religion and understand that you oppose civil marriage for same-sex couples. But the actions and rhetoric of NOM, and those of the event’s speakers and co-sponsors, fundamentally contradict Christian belief in the fundamental human dignity of all people,” the letter said. “We ask that you will reconsider your participation and join us in seeking to promote reconciliation rather than division and hatred.”

The Rev. C. Welton Gaddy, president of the Washington-based Interfaith Alliance, which supports marriage equality for gays and lesbians, said his group will defend the rights of houses of worship to not perform same-sex wedding ceremonies, but he said, “We don’t want that position on marriage to be the only one.” 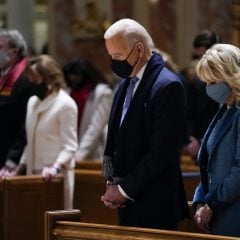