(RNS) Last week, two Mormons received letters from the Church of Jesus Christ of Latter-day Saints informing them they were under investigation for apostasy, an offense that can lead to their excommunication. Both will appear before separate bodies of Mormon bishops before July.

That action raised a couple of questions — what exactly is excommunication, who practices it and why? Turns out, a whole lot of world religions have some form of excommunication, though not all of them call it that. 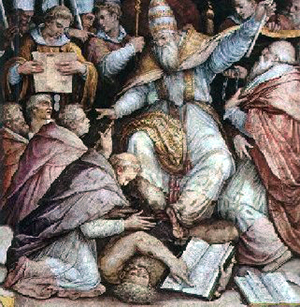 Pope Gregory IX is shown excommunicating Emperor Frederick II. Although the Catholics invented the practice of excommunication to deal with severe sins, other religious groups have also adopted it for their own purposes.

Q: So, who excommunicates? I thought it was just for Catholics.

A: No, but the Catholics invented it. In the Catholic Church, some acts are so serious they automatically incur this harshest of punishments — attacking the pope, obtaining an abortion, apostasy and the like. The excommunicated person is not stripped of his or her Catholic baptism — indeed, he or she is still expected to attend Mass — but is barred from receiving any of the sacraments, the central sacred rites of the church.

Excommunication isn’t necessarily a formal process — under Catholic teaching, a woman who undergoes an abortion is automatically excommunicated (as are the doctors who facilitated it). Some Catholics would like the same penalties applied to politicians who support abortion rights. There are exceptions, though, for women who are forced into the procedure by an abusive husband, say, or for minors, accident victims or the mentally impaired.

Mormons have excommunication, too, and it is also their most serious form of punishment. An excommunicated Mormon is stripped of his or her baptism and not permitted to enter a temple or perform any rites there because he or she is “living in opposition to the church.”

Q: What is the point of excommunicating someone?

A: It isn’t always intended as a punishment, but is often seen as a tactic for jolting someone back in line with church teachings, laws or principles. Mormon rules specifically say excommunication can be pronounced to protect other members of the church from what it considers dangerous ideas.

A: Oh, yes — but rarely. The last big Mormon purge was in 1993 when it cast out six scholars who had been critical of the church. They came to be known as “The September Six” and their ouster is still controversial.

Q: What does an excommunicated person have to do to get back in the good graces of the church?

Q: That doesn’t sound like fun. Are there any lesser forms of punishment besides excommunication?

A: Some Protestant groups practice “disfellowship” — also not a party. It involves a sort of social outcast status: No one sits with them in the pews, invites them to participate in congregational government or do anything else official. Mormons also have disfellowship, a lesser sentence than excommunication, in which the person retains his or her Mormon baptism but loses the privilege of entering the temple where the most sacred Mormon rites occur.

Q: So Mormons and Catholics excommunicate and Protestants disfellowship. What other punishments do religions mete out to wayward members?

A: The Amish and other “plain-clothes people” such as Mennonites engage in “shunning,” refusing to eat with, sit with or otherwise communicate with someone the community deems out of line. And Quakers can “write someone out of meeting,” though a poll conducted among Quakers in 1984 showed no one knew of that happening to anyone in their communities. Fun fact: President Richard Nixon, a Quaker, could have been written out of his local meeting for his involvement in the Vietnam War — Quakers are pacifists — but he was not.

Q: What about other religions? What do they get up to when they have members they want to sanction?

A: Lots of things. Jews have a practice called “herem” or “cherem” that is a lot like shunning but is practiced today only among the ultra-Orthodox. Buddhists have no excommunication, though monks in some orders can be tossed out for breaking one of their four vows — to practice chastity and honesty and to refrain from stealing and committing murder. An outcast monk may never return to his order.

Hindus have no official excommunication process, either, though “losing caste” has historically been as serious. Muslims have no process of excommunication, though in some Muslim countries, especially Middle Eastern ones, there is “takfir.” Someone is takfir when he or she is considered not in compliance with Shariah, which includes making statements some may consider blasphemous. Being takfir is bad — just ask Salman Rushdie — but not all Muslims agree on it. Al-Qaida has used it as justification for attacking its enemies within Islam; the Muslim Brotherhood has condemned it as something that divides, rather than unites, the Muslim ummah, or community.