RIO DE JANEIRO (RNS) As the World Cup reaches the quarter finals this Saturday (June 28), a number of Muslim players whose teams have made it through the tough group matches will be facing a bigger challenge off the field than on it.

Sami Khedira, midfielder for Germany, is one of the Muslims who is anticipated to compete in the 2014 FIFA World Cup during Ramadan. Creative Commons image by Stefan Baudy

The holy month of Ramadan coincides for the first time since 1986 with the soccer tournament. The 30-day period of fasting and prayer, which requires dawn to dusk abstinence from food, drink and sex, begins Saturday and is expected to end July 28.

It will be a critical testing time for practicing Muslim players who need to be in peak condition to meet the demands of the game during the knockout matches. Add to this Brazil’s heat and humidity, which has prompted required breaks every 30 minutes to rehydrate athletes with water.

SEE WHICH PLAYERS WILL OBSERVE RAMADAN DURING THE WORLD CUP

Sheikh Khaled El Din, chairman of Brazil’s Council of Sheikhs, said along with food and drink restrictions, “the person has to watch their moral behavior.

It will be a tough call for some athletes, normally used to retaliating in anger, when their opponent knocks them to the ground.

“We have examples of athletes in several European clubs, who fast during Ramadan and continue playing well,” he said in an interview with UOL Sport.

Not everyone agrees. One of the main challenges of keeping up with the fast is shifting sleep patterns that can alter the biological clock of players.

Ali Zogbhi, vice president of the Federation of Muslim Associations in Brazil, said on Brazilian TV: “Science has already proved that if you do physical exercise without eating you experience serious problems. Therefore, it is more sensible to allow players to not fast during this period.”

Both the Algerian and Nigerian teams, which include Muslim players, have already qualified for the knockout World Cup games. In 2011, the Nigerian youth team decided to skip the daytime fast when they took on England in the knockout stage of the FIFA U-20 World Cup. The squads have yet to reveal their intentions this year.

Momade explained: “If the player believes he will experience a dip in form and this will degrade the performance of his work, he can choose to break the fast, but after the work is finished, he should compensate for the period of fasting.”

Brazilian physiologist Turibio Leite worked with athletes in Dubai during Ramadan for a number of years.

“When I lived there we couldn’t force the athletes to train without eating, so we trained during the night,” he said.

Luckily, daylight in Brazil adds up to only 11 hours, compared to 16 hours in Europe and England, which may give players a degree of respite. 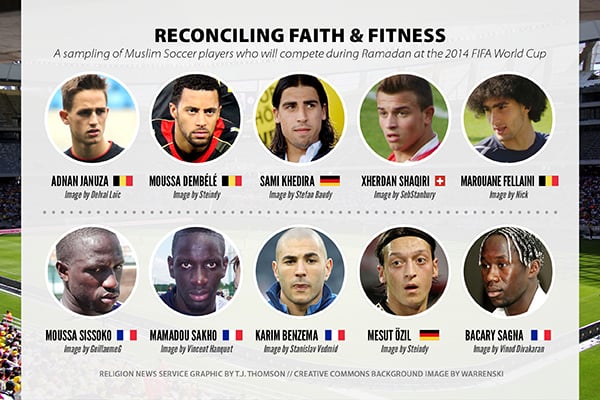 For the first time since 1986, Ramadan and the World Cup will coincide. Prohibitions, such as refraining from eating or drinking during the day, present a special challenge to Muslims competing in the competition.