SPOKANE, Wash. (RNS) After suffering a fractured pelvis during an early season bike training, Sister Madonna Buder sat up in the middle of the road and did what she always does: She talked to God.

Sister Madonna Buder, dubbed “the Iron Nun,” is the oldest woman to ever finish an Ironman triathlon.

“Lord, what are you doing this for?” she asked.

“I got this little answer: ‘Well, did you think that maybe I’m preserving you from something worse, even if it be yourself?’” Buder said recounting the moment.

Known as “the Iron Nun” for competing in the grueling Ironman competitions, Buder is a member of the noncanonical Sisters for Christian Community and a frequent conversationalist with God.

Last week she was inducted into the USA Triathlon Hall of Fame in Chicago, and at almost 84 years old (her birthday is July 24), she holds the world record for the oldest woman to ever finish an Ironman triathlon.

Buder first broke the record for the oldest woman to finish an Ironman at Ironman Canada in 2012. For two years, Buder had tried to open the 80-plus group for women. She had already opened several age groups for women in the Ironman distance and held other records before that, she said, but she wanted to take another shot at 80-plus.

“On the way up, I said, ‘Lord, either three times is the charm or three strikes and I’m out, no more of this Ironman business.’ So he made the most perfect weather I think we had ever had. No excuse not to finish. Nothing went wrong with the bike or in the water.”

With total nonchalance and some giggles, she recounted when she broke the record. 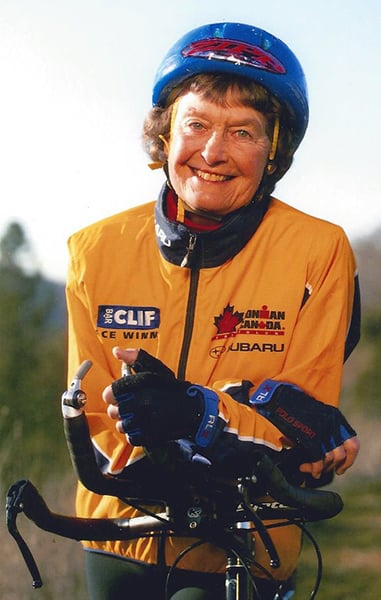 “I finished and that’s all I was concentrating on, getting the job done,” Buder said. “But the announcer went crazy and the next day people were coming up to me, congratulating me on my world record. I said, ‘What? Oh, well yes, if no one (at 82) had ever done it before, I guess it is a world record.”

Buder’s running career started at age 47 and just five weeks later she ran her first race at the Lilac Bloomsday Run in Spokane. Back then, she was part of an order called the Sisters of the Good Shepherd and attended a workshop given by a priest who expounded on the benefits of running for the body, mind and soul.

After she realized she was a good runner and wanted to run in the Boston Marathon, she thought to consult her bishop since it wasn’t typical of nuns to run races.

“He relaxed, sat back in his chair and smiled and said ‘I wish more of my priests would do more of what you’re doing,'” she said.

She moved to Spokane when her former order sent her in the early ‘70s. It was a time many sisters were leaving their traditional orders, Buder said, and she left hers to join a nontraditional order, Sisters for Christian Community, after reading a book about them.

Buder volunteers with the city’s Community Oriented Policing Services, visits the jail regularly and, of course, competes in triathlons. She estimates that to date she’s done about 360 triathlons.

This season she had big plans to compete in three races in April, including the Boston Marathon, but after her pelvic injury, she had to sit those out. But she recovered in time to make it to Eagleman in Maryland at the beginning of June.

It was a little “tumble rumble” out in the water, she said, and the run was laborious because of the injury, but the bike went smoothly and she crossed the finish line and was awarded a slot at the world championship Ironman in Kona, Hawaii, in October. This month, she’s going to Challenge Roth in Germany.

“All these decisions I’m having to take is a step out in faith,” she said. “I have to say, ‘Lord, please protect me.’ Then it’s ready or not, here I go.”

When Buder opened the female 80-plus groups at Ironman Canada in 2012, it was actually only half of her goal. The other half is to do the same at Ironman Hawaii. And if anyone dares question if she’s too old, she’ll say you’re only as old as you think you are.

“If you don’t think age and you just get up and do and you think you’re a teenager, well, you’ll start to act like one,” she said. “And you also find out that you never get too old to learn new tricks.”

When she thinks about all of her accomplishments up until now, she says she doesn’t understand how it all happened.

“I couldn’t believe it when I realized I was the oldest participant, older than the men, in some of the races I’m doing. I said, ‘Lord, how did I ever get here?’” she chuckled.

She at least knows why she’s still competing and why she plans to continue competing: the public. While she can get around Spokane fairly well without being recognized, every few steps at big races, people stop Buder to chat, get pictures and autographs, and tell her what an inspiration she is.

“I don’t see what they see, but I guess I don’t have to,” she said. “I just have to be there. And it’s just that my public won’t let loose of me. And as long as I don’t have an excuse — like a fractured pelvis — not to, I will keep on going.”