A new Pew Research survey finds U.S. adults feel most warmly about people who share their religion or those they know as family, friends or co-workers.

Americans give their highest scores to Jews, Catholics and Evangelicals on a zero-to-100 “thermometer” featured in the survey, “How Americans Feel about Religious Groups,” released Wednesday (July 16). They’re nestled within a few degrees of each other: Jews, 63; Catholics, 62; evangelicals, 61.

Pew took the thermal reading because “understanding the question of how religious groups view each other is valuable in a country where religion plays an important role in public life,” said Greg Smith, Pew’s associate director of religion research.

Jews, one of the nation’s smallest religious groups, benefit from cultural, theological and historic ties with Christians — gaining what might be called a friends-and-family ratings boost.

Meanwhile, America’s largest religious groups, Catholics and Protestants, benefit from self-regard. Pew found, perhaps unsurprisingly, that people rate their own groups higher than others. Still, the groups’ overall average scores are pulled down by those who don’t share these faiths. Catholics give themselves an 80 score while non-Catholics give them a 58. Evangelical Christians score 79 with people who called themselves “born-again” or evangelical, but only 52 with others.

Americans rated a series of religious groups on a “feeling thermometer” from 0 to 100 in a new Pew Research Center study.

“People are somewhat polarized about evangelicals,” Smith said. The survey finds “roughly as many people give evangelicals a cold rating (27 percent) as give them a warm rating (30 percent).”

“I think it speaks to evangelicals’ prominence in American life. Lots of people know something about them,” he said.

And, according to the survey, some don’t like what they know.

White evangelicals give their highest warmth score to Jews, 69. However, all that warmth is not reciprocated. Jews gave evangelicals overall a much cooler score of 34.

White evangelicals are leery of other non-Christians and downright chilly toward nonbelievers. They rank Buddhists at 39, Hindus at 38 and atheists draw 25 — the lowest score of any group.

“And the feeling is mutual,” Smith said. Atheists give evangelicals overall a rating of 28.

Although atheists overall are cold to Christians, “they’re not uniformly cold to all religious groups,” said Smith. Buddhists get 69, Jews 61 and Hindus 58. 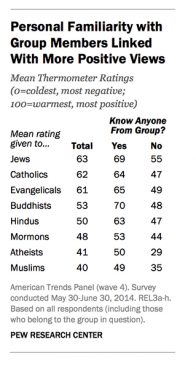 Americans are more likely to favorably rate members of other religious groups when they personally know members of those faiths.

The survey was conducted between May 30 and June 30 with a nationally representative panel of 3,217 randomly selected adults — 2,849 people answering the survey online and 368 responding by mail. The margin of error is plus or minus 2.2 percentage points.

The Pew results match closely with a similar “feelings thermometer” study in 2007 by political scientists Robert Putnam and David Campbell for their 2010 book, ”American Grace.”

The overall order of warm-to-cold views for religious groups is unchanged between the two studies. However, the exact ratings for groups can’t be compared directly because their methodology differed. (Campbell and Putnam used a phone survey for their research.)

Campbell, a political scientist at the University of Notre Dame, said he was particularly struck that Pew found “there hasn’t been any real change in views on Mormons in spite of the (hit Broadway play) “The Book of Mormon” and Mitt Romney’s presidential campaign and all the attention to the so-called Mormon Moment.”