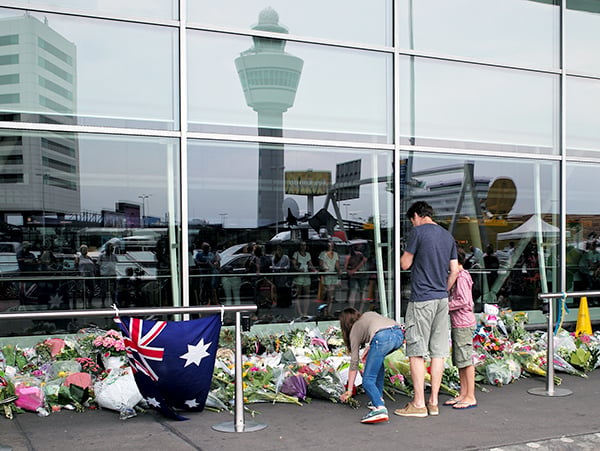 A family adds flowers to a growing memorial at Amsterdam Schiphol Airport. The memorial was erected for the victims of the Malaysian Airlines flight MH17, which crashed in the Ukraine on July 17, 2014, and killed all 298 people on board.

Russian-backed Ukrainian separatists on Monday released the bodies of the victims of Malaysia Airlines Flight 17, which had languished in refrigerated train cars since the plane was shot down on July 17. The world was shocked by images and reports of bodies being looted, thrown in the back of pick-up trucks and unceremoniously stacked in the train cars.

But for many of the victims’ families, the release has come too late for them to complete the burial customs of their various religions. This edition of The ‘Splainer looks at the death rituals of the different religions practiced by the victims, and how the delay in retrieving the bodies disrupted them.

Q: What religions were practiced by the passengers and crew of Flight 17?

A: We know from profiles of the dead that there were Muslims, Christians, Jews and Hindus aboard. Among the dead are a Roman Catholic nun, a Sufi and a former soldier in the Israel Army. And we can draw a couple of conclusions about the rest from Dutch and Malaysian censuses. The Netherlands, which lost 193 citizens aboard Flight 17, is one-quarter Catholic, about 15 percent Protestant and about 6 percent Muslim. About half of the country’s population claims no religious adherence. Malaysia is predominantly Muslim (about 60 percent) and there are also sizable segments of Buddhists, Taoists and Hindus.

Q: What kinds of religious rituals do those religions require when someone dies?

Friends and family lower a casket into the ground during a Catholic burial service In Dorchester, U.K. Catholics place an emphasis on burying the body, as they believe in a physical resurrection at Jesus’ promised return.

A: The presence of a body is essential to the performance of funeral rites of most of those religions. Most Christians, especially Catholics, place an emphasis on burying the body, as they believe in a physical resurrection at Jesus’ promised return. Catholics also consider the burial of a body a remembrance of the burial of Jesus in the tomb.

Jewish law dictates that the dead are never left unattended. Remember after the 9/11 attacks, Jews from all over volunteered to sit as “shomrim,” or watchmen, for the remains of victims taken to city morgues. Here, the victims of Flight 17 sat unattended for more than a day after they fell from the sky before retrieval began. Jews do not traditionally say the Kaddish, the prayer of mourning recited for 11 months, until after the body is lowered into the grave.

Jews are typically buried quickly, often within 24 hours, because Jewish law prohibits embalming as a desecration of the body. According to Jewish-Funeral-Guide.com: "Embalming is in fact a disservice to the deceased, since the soul cannot leave the body and the deceased cannot rest in peace until the body disintegrates."

Hinduism requires bodily cremation, a necessary step to free the soul from the body and prepare it for reincarnation. But if a body cannot be recovered, an effigy can be made to stand in. Ancient Hindu writings prescribe 360 strands of sacred grass be formed into a figure and burned.

Q: What about Muslims? Don’t they have a requirement that their dead be buried quickly and in a certain place? Muslims prepare a body for burial in Dhaka, Bangladesh.

A: Yes. Islamic custom requires the dead be buried as soon as possible, usually within 24 hours. Like many religions, Islam stresses respect for the body of the dead, and an important aspect of this is the ritual washing of the body with scented water by family members. Muslims wrap the bodies of their dead in simple white shrouds.

The body is the focal point of the funeral prayer, or Salatul Janazah, placed at the front of the congregation and before an imam, who stands at the body's head if it was a man, and at the torso if it was a woman. Mourners then form three lines behind the imam and pray for the dead's forgiveness. Muslims bury the dead on their right side, facing Mecca. It is preferred that Muslims be buried near where they die so embalming is not required. But Flight 17 went down far from where its passengers, Muslim or otherwise, lived or were visiting.