(RNS) The once obscure life and career of Regina Jonas (1902-1944), the world’s first woman rabbi, was honored on Thursday (July 24) at an international gathering of rabbis and lay people at Terezin, the Nazi concentration camp that is better known by its German name (Theresienstadt), located near Prague in the Czech Republic. 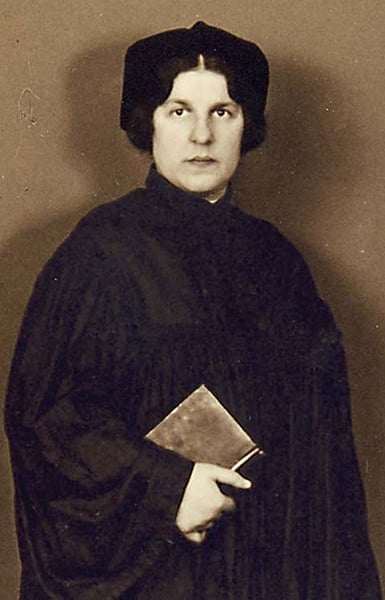 Sally Priesand attracted well-deserved national attention in 1972 when she became the first female rabbi in North America, at the Reform movement’s Hebrew Union College-Jewish Institute of Religion in Cincinnati. But in 1935, when Jonas completed seminary studies in Germany, she was forced to receive private ordination because of gender bias among her school’s faculty.

In November 1942, the Berlin-born rabbi was deported to Theresienstadt along with thousands of other Jews. It was the German “showcase” concentration camp as the Nazis attempted to deceive the prisoners and the world by permitting concerts, classes, and other cultural events — even a children’s operetta. It was a cruel fraud because most of the prisoners were ultimately sent to their deaths at Nazi extermination centers.

Jonas worked with fellow Theresienstadt prisoners Viktor Frankl, the famous psychoanalyst, and Rabbi Leo Baeck, the leader of the doomed German Jewish community. Her grim task was to meet the incoming trains and provide counseling to the frightened and bewildered arriving Jews. In addition, during her two years in Theresienstadt, she presented 24 scholarly lectures on Judaism.

But all that came to an end 70 years ago when Jonas and her mother were transported to Auschwitz in October 1944, where they were killed. The 42-year-old rabbi left no immediate survivors.

Both Frankl and Baeck survived the Holocaust, but in their post-war writings they never mentioned Jonas’ important work. By the early 1990s, few people remained alive who remembered her name or had personally known her.

It seemed Jonas, the world’s first female rabbi, was to be forever forgotten.

But in 1991 something remarkable happened that comes straight out of a thriller novel or mystery film. As a young girl in the 1970s, Katharina von Kellenbach, a German-born professor who now teaches religion at St. Mary’s College of Maryland, learned a frightening fact about her uncle, Alfred Ebner.

He had been a German SS officer involved in the death of 30,000 Jews in Belarus. After World War II, Ebner was tried as a war criminal, but was never convicted. Shocked by her uncle’s evil actions, von Kellenbach focused her academic work on the Cain-Abel biblical story: the murdered and the murderers. She visited the city of Pinsk in Belarus with some of Ebner’s Jewish victims who survived, and later did Holocaust research in an East Berlin archive. Today, she’s a widely respected scholar of the Holocaust, Christian-Jewish relations and feminism.

In that East Berlin archive, von Kellenbach discovered an envelope containing the only known existing photo of Regina Jonas (she’s seen wearing clerical robes) along with her rabbinical diploma, teaching certificate, seminary dissertation and other personal documents. There were also letters from abroad in which Jewish refugees thanked the rabbi for taking care of their parents who had remained in Germany.

Von Kellenbach immediately recognized the importance of her discovery because it revealed a dedicated and courageous woman who performed extraordinary rabbinical duties under the genocidal Nazi regime. Today there are biographies and academic studies of Jonas as well as a film and an opera based upon her life.

Priesand is still with us, thankfully, along with nearly a thousand other female rabbis, including my daughter. Thanks to von Kellenbach we now know about Regina Jonas, and she remains with us in spirit.

“Almost nothing halakhically (Jewish religious law) but prejudice and lack of familiarity stand against women holding rabbinic office,” Jonas wrote in her seminary thesis. And writing in Berlin in 1938, she said: “If I confess what motivated me, a woman, to become a rabbi, two things come to mind. My belief in God’s calling and my love of humans. God planted in our heart skills and a vocation without asking about gender. Therefore, it is the duty of men and women alike to work and create according to the skills given by God.”