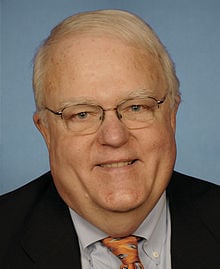 The newest Catholic in Congress! Robbie George and Pat Robertson say the U.S. may need to invade Iraq -- again. A corrupt priest had the same initials as Mary Mags, so he's good. And pro tip to pols: be careful what Bible verses you cite ...

When former Virginia governor Robert F. McDonnell was inaugurated in 2010 he cited Scripture, as pols are wont to do, specifically a verse from the Gospel of Luke: “To whom much is given, much will be required.”

Well, be careful what you pray for. The prosecutor in the corruption trial of McDonnell and his wife, who are accused of taking $177,000 in gifts in exchange for political favors, tossed that line back at the family values former governor, whose defense has largely been predicated on blaming his wife for everything.

He is living with a Catholic priest in Richmond, a family friend, while the trial is going on and while his marriage is "on hold." Thing is, the priest was convicted of a misdemeanor sex charge in 2002, which doesn't seem like it would fit with McDonnell's rhetoric about sexual purity.

Look who else is Catholic now!

Though he may have some catechism classes to finish:

Anti-immigrant Rep. Sensenbrenner becomes a Catholic -- but will he have a conversion on immigration reform? http://t.co/k9vifuPPnE

Mary Magdalene was the most devoted of Jesus' apostles, the woman who stayed at the Cross when he died, discovered the empty tomb on Easter morning and first preached the news of the Resurrection. The Rev. Marcial Maciel Degollado was a sexual predator who abused seminarians and lived a double life, fathering three children and spreading cash around the Vatican to buy protection for his corrupt, uber-orthodox order, the Legionaries of Christ. Yet some of the late Maciel's followers, despite a Vatican overhaul of the LC, say Maciel and the Magdalene are JUST ALIKE, starting with the fact that, ya know, they have the EXACT SAME initials.

Jason Berry deconstructs this one at NCR. Today's must read.

Meanwhile, the Dominican Republic may try to bring former Vatican ambassador Jozef Wesolowski back to the country to face sex abuse charges once the pope is done with him, if that's possible. And Poland may also stake a claim to their native son, who was ordained a priest by the late saint John Paul II. Stay tuned for the latest developments ...

Pope Benedict fit as a fiddle

When Benedict XVI shocked the church by becoming the first pope in centuries to resign rather than die in office, many in his conservative fan base said he was obviously dying to take such a drastic step. Well, Benedict celebrated Mass this week for former theology students of his who meet every year to discuss his work, and it turns out the pope is doing better than ever. So, Francis, if you need a break, there's now a "supply pope" on call ...

The Protestant and the Roman Catholic conservatives agree on several things in today's must-see video from their "700 Club" chat, including the necessity of putting boots on the ground in Iraq if the Islamic State nutters can't be destroyed:

That was actually Professor George's view on the first Iraq invasion, which turned out well.

Meanwhile, an American has died in Syria fighting for the Islamic State. What motivates such people?

Was James Foley a martyr?

My story on another American killed in the Middle East, and a whole different narrative.

Zara has been selling a kids' T-shirt that looks like a concentration camp uniform http://t.co/2aqiKFTyzi pic.twitter.com/IjIuaKPuOx

Now this is how you deal with neo-Nazis

"The town hall of a Swedish city will play the theme from the Holocaust film “Schindler’s List” before and after a public meeting of a neo-Nazi party."

Klezmer music is back from the dead

... And better than ever, so Henry Sapoznik, founder and director of New York's annual KlezKamp festival, is ending it after 30 years. Now, he says, he will take his message to places that really need klezmer music, like "the Midwest and beyond."

An Oldie but a Goodie

Q - How many angels can dance on the head of a pin?

Stay tuned to this space for further updates throughout the day.