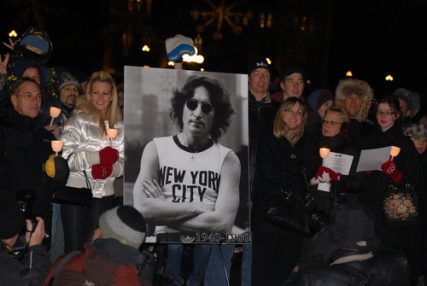 Fans gather at the Centennial Flame to sing “Give Peace a Chance” on the 30th anniversary of John Lennon’s assassination on Dec. 8, 2010 in Ottawa, Ontario.

(RNS) The man who murdered John Lennon wants only one thing now — to tell others about Jesus.

Mark David Chapman, 59, told parole examiners he was no longer the man who sought notoriety through killing the Beatles rock star in 1980.

Now, he said, he’s sorry, “forgiven by God” and eager to spend his days — in prison or out — ministering to others.

Examiners denied Chapman the possibility of parole for the eighth time on Aug. 20. According to the 25-page transcript of the hearing, Chapman expected that finding. He will continue serving 20 years to life at the Wende Correctional Facility in Alden, near Buffalo, N.Y.

In his last parole hearing in 2012, the transcript shows, he was just as interested in testifying about his religious faith.

The transcript details how he spent years plotting the shooting of Lennon, acquiring a gun and bullets, lying to his wife about his whereabouts and plans. No more, he said. Now, his wife of 35 years, who visits him at least annually, is his partner in faith.

He told the board: “We’re closer to the Lord now than we were on the street so I am going to credit him with keeping our marriage together and our sanity.”

Chapman’s anniversary gift to her was a gold cross with a ruby heart in the center. It was not “just to say. ‘Thank you, honey.’ It’s to tell God thank you for his love for us, for sticking with us,” Chapman said.

Parole examiners asked whether Chapman might harm others if released and whether he was concerned that he might be a target himself for someone seeking the notoriety of murdering him. Chapman pledged that his crime days were over and as for risk to himself: “I leave it in God’s hands.”

His main interest now lies in ministering to prisoners. “Me and my wife have a ministry. We distribute brochures that tell people about Christ. … That is where my heart is.”

Chapman apologized for the pain he caused Lennon, his family and his millions of fans: “I am sorry for being such an idiot and choosing the wrong way for glory. I found my peace in Jesus. I know him. He loves me. He has forgiven me.”

The upshot: He plans to spend his days “telling people, ‘Hey, you have another option. You have Christ. … Either crime or Christ, which way do you want to go here?’”

And he predicted correctly during the hearing (“We all know how this will turn out,” he said) that those days would be in prison. The board ruled that Chapman’s release would be incompatible with the welfare of society” and would “deprecate the serious nature of the crime,” according to the Rochester Democrat and Chronicle.