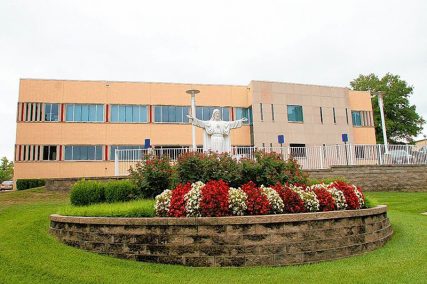 ST. LOUIS (RNS) The termination of two lesbian faculty members at Cor Jesu Academy, an all-girls Catholic high school, has prompted an outcry from alumnae who have vowed to withhold donations to the school.

In the last several weeks, alumnae have created a private Facebook group with more than 2,000 members in support of the couple, Olivia Reichert and Christina Gambaro, urging supporters to call and write to Cor Jesu leaders and voice their concerns.

Cor Jesu is in the midst of its “One Heart, One Spirit, One Vision” capital campaign for a new chapel, gym, student commons and additional parking.

Reichert said she and Gambaro were asked to resign after the school said in late July it received a copy of a mortgage application with the couple’s names. The couple had married in New York over the summer and the school said they had violated the moral contract faculty are required to sign as part of employment.

The firing comes as news that a chemistry teacher at a Catholic, all-girls high school in Bloomfield Hills, outside Detroit, said she was fired before the semester started because of her “non-traditional” pregnancy. The teacher, Barbara Webb, 33, is a lesbian in a committed relationship with another woman. She worked at Marian High School for nine years, the Detroit Free Press reported.

A statement from St. Louis’ Cor Jesu said the school “does not publicly discuss personnel matters.”

Many there are concerned not only about Gambaro and Reichert, but how the decision to fire gay faculty will affect current and future Cor Jesu students.

In response, the Chargers Allies, another Facebook group with more than 200 members, was created as “a safe space where both members of the LGBTQ community and those who support them can connect and hopefully find a way to create change at Cor Jesu Academy.”

Chargers Allies member Coco Fernandez, 22, an alumna of the school who now lives in Chicago, said she wants all who work and attend Cor Jesu to “feel welcomed and accepted as who they are, regardless of sexual orientation.”

Fernandez also said Reichert had been one of her favorite teachers at the school.

“She was a great role model for the girls. She was always kind,” Fernandez said.

“We are being taught to be open and accepting of everybody, and yet teachers are being fired because of their sexual orientation,” Fernandez said when speaking about her education at Cor Jesu.

In a Facebook post, Gambaro wrote that although alumnae support for her and her wife had been overwhelming, “the law is not on our side, nor is the church, so we have no ground to stand on.”

As in many other states, it is legal in Missouri to fire someone based on sexual orientation. And while the Roman Catholic Church says gays should be treated with compassion, the church rejects gay marriage and considers homosexual acts a “grave depravity” and “intrinsically disordered.”

Gambaro and Reichert are only the latest in a string of recent gay faculty firings at Roman Catholic schools.

Last year, Ken Bencomo, who taught English at St. Lucy’s Priory High School in the Los Angeles suburb of Glendora for 17 years, was fired after an article in the Southern California newspaper Inland Valley Daily Bulletin published a story and video about his wedding.

That same year, teacher Carla Hale was fired from a Roman Catholic high school in Columbus, Ohio, after someone pointed out that she listed her lesbian partner’s name in her mother’s obituary.

In Pennsylvania, Michael Griffin, an openly gay teacher at Holy Ghost Preparatory School, was fired in December 2013 for obtaining a marriage license with his longtime partner in New Jersey, according to news reports.

And in 2012, Al Fischer, a popular music teacher at St. Ann Catholic School in north St. Louis County, was fired after church officials learned that he planned to marry his male partner of 20 years in New York. Fischer also subsequently lost his position as a music director at St. Rose Philippine Duchesne Catholic Church in Florissant.

Cor Jesu Academy is a ministry of the Apostles of the Sacred Heart of Jesus and operates independently of the Archdiocese of St. Louis. The archdiocese said that it would expect any Roman Catholic school to follow the church’s teaching.

Gambaro and Reichert, for their part, said they hoped their terminations would “guide the Catholic school system towards greater tolerance and acknowledgment of LGBTQ issues.”

“We are both grateful for the time we had at Cor Jesu Academy,” Gambaro and Reichert wrote to the Post-Dispatch. We “will cherish the memories and experiences created with students, athletes, and colleagues over the years.”