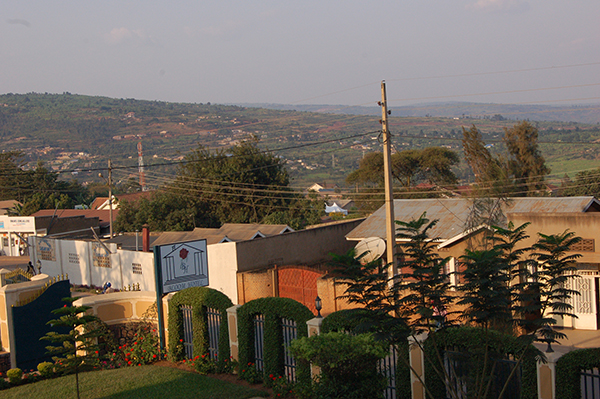 A street in the Eastern Democratic Republic of Congo town of Bukavu, where the three nuns were laid to rest. Religion News Service photo by Fredrick Nzwili
September 12, 2014
Fredrick Nzwili

A street in the Democratic Republic of Congo town of Bukavu, where the three nuns were laid to rest. Religion News Service photo by Fredrick Nzwili

(RNS) Three elderly Italian nuns murdered in Burundi were laid to rest Thursday (Sept. 11) in a Xaverian cemetery in the Democratic Republic of Congo amid heightened calls for action about their death.

Sister Lucia Pulici, 75, Sister Olga Raschietti, 82, and Sister Bernadetta Boggian, 79, of the Xaverian Missionary Sisters of Mary were gruesomely murdered Sunday in their convent in the Kamenge area of Burundi's capital, Bujumbura.

The triple murders shocked Christians across the globe and ignited calls for the protection of sisters worldwide. The nuns were reportedly beaten and killed with a knife. At least one nun was decapitated. There were conflicting reports about whether they had been raped.

While mourning their deaths, Sister Enelesi Chimbali, general secretary of the Nairobi-based Association of Consecrated Women in Eastern and Central Africa, said such women left their comfortable homes, convents and native countries to serve the poor and downtrodden.

The nuns were buried in Bukavu town in the DRC, where the order has a cemetery. The order's district covers both Burundi and parts of neighboring DNC. The sisters had wanted to be buried in Africa according to the Xaverian order's former regional superior, ​Sister Delia Guadagnini, to mark their love for the continent to the end.

The nuns had lived in Burundi for the last seven years, offering health care, spiritual and social support to the local communities. They had served in Africa for more than 50 years, spending most of the time in the DRC.

Thousands attended their requiem Mass on Wednesday in Bujumbura, where church officials called for thorough investigations and the truth about the deaths.

On the same day police said 33-year-old Christian Butoyi Claude, a suspect in their custody confessed, to the killings, saying the convent was built on his family’s land.

The suspect had in his possession two keys the sisters used to enter the convent and a mobile phone belonging to one of the sisters, according to the police.

But the nuns of their order are questioning the police version of events. Guadagnini said the crime was not committed by one person and the police arrest was an excuse to divert attention.

“We don’t believe in the police’s version,” Guadagnini told the Fides news agency. “We do not think this horrible crime was committed by a single person,” she said.

This is not the first killing of Catholic clergy or religious order members in the small East African country where a majority of residents are Christians.

In 2011, a Croatian nun working with an Italian charity was killed in an attempted robbery. In 1995, two Italian priests and a lay female volunteer from the Xaverian mission were killed for allegedly backing a Hutu tribe militia.

Related Posts
By Amy Klein
What good is faith when your fertility treatments aren't working?
By Alejandra Molina
Who is Junipero Serra and why are California protesters toppling statues of this saint?
By David Crary
Amid pandemic, scores of US Catholic schools face closure
By Alejandra Molina
On LA’s Skid Row, Catholic Worker’s ‘Hippie Kitchen’ adjusts to COVID-19
By Bill Baker
A conversation with Father James Martin: 'Why did God let this happen?'