Catching up from the weekend? Here are 10 items to get you started: 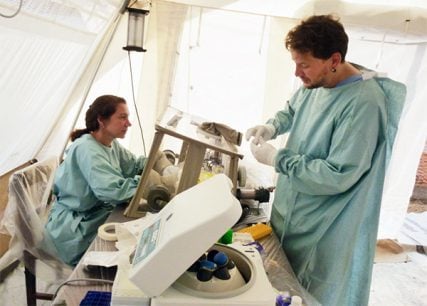 An American doctor who was exposed to Ebola while volunteering in Sierra Leone has been admitted at the National Institutes of Health near DC. Richard Sacra, an American missionary doctor who was working in Liberia, was released from the Nebraska Medical Center after contracting the virus.

The Muslim community is reeling from Friday’s news that a man who claimed to have Muslim ties beheaded a woman co-worker after being fired from his job in Oklahoma.

Megachurch leader T.D. Jakes is threatening to sue rappers Young Jeezy, Kendrick Lamar over sampled speech on ‘Holy Ghost’ remix, saying it rips from one of his sermons.

Bishop Kieran Conry, previously considered one of the most influential prelates in England, has abruptly resigned, admitting he was “unfaithful.”

Interesting detail from a profile of Ferguson’s Police Chief Thomas Jackson: he has been meeting with a group of pastors called “Clergy United” almost daily.

Brazil’s increasingly powerful evangelical Christians are close to electing one of their own as president.

Students at Brigham Young University protested the school’s ban on beards. Plus, Mormon feminists may have been surprised by some subtle changes in vocabulary and approach over the weekend at the general women’s meeting, where females were called not just “sisters” but “blessed disciples of Jesus Christ.”

Sudan apostasy woman Mariam Ibrahim, who appeared at the Values Voters Summit gathering over the weekend, plans to campaign against religious persecution.