JERUSALEM (RNS) On Friday (Oct. 3), when Israeli Jews sit down for their pre-Yom Kippur meal, prior to the Day of Atonement fast, many will be discussing where to buy their produce during this agricultural sabbatical year.

That’s because this Jewish New Year, 5775, is a sabbatical year, when, according to the Bible, the land of Israel is supposed to lie fallow. Called a “shmita” year in Hebrew, the sabbatical is intended to allow the poor to reap whatever may still be growing on the land “so that the poor of your people may eat,” Exodus 23:11. 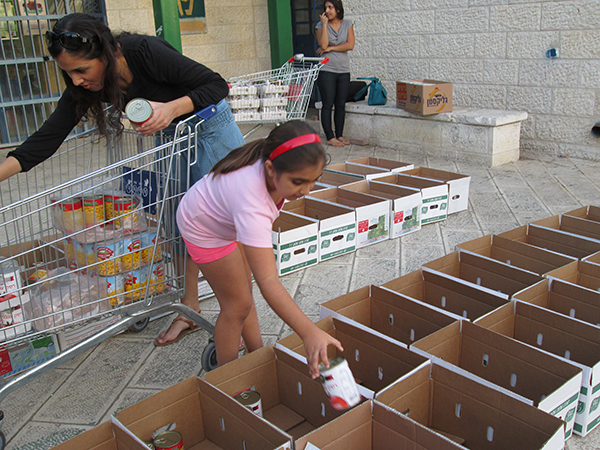 Volunteers pack food packages to be distributed to needy Israelis. Some worry it will be more difficult to obtain produce during the sabbatical year called shmita. That’s because, according to the Bible, every seven years the land of Israel is supposed to lie fallow. Called a “shmita” year in Hebrew, the sabbatical is intended to allow the poor to reap whatever may still be growing on the land “so that the poor of your people may eat,” Exodus 23:11. Religion News Service photo by Michele Chabin

The start of the sabbatical-year prohibitions, which include sowing, planting, pruning, reaping, harvesting and improving the land, coincided with the start of Rosh Hashanah, the Jewish New Year that began this year on Sept. 24. Produce planted before the shmita can be harvested this year.

But people have to eat, so a century ago rabbis found a way to bypass the law so no one goes hungry.

Today most Israeli Jews observe shmita via a legal loophole endorsed by the Chief Rabbinate called heter mechira. It permits farmers to sell their land temporarily to non-Jews, who aren’t bound by shmita. For most people, this arrangement results in little if any inconvenience.

But hundreds of thousands of ultra-Orthodox Jews both in and out of Israel don’t hold by the loophole, making the shmita year a challenge not only for them but for the many institutions — from hospitals to soup kitchens — that serve members of the very religious public.

Recently, leaders in the Israel Defense Forces, one of the largest public institutions in Israel, had to decide whether to purchase fruits and vegetables from Israeli farmers this year, as it has always done, or to obtain the produce from abroad.

To accommodate the small minority of ultra-Orthodox soldiers in the army, the IDF initially decided to purchase only imported food as well as food grown in the southern Arava desert, a stretch of Israeli land outside the boundaries of the biblical land of Israel.

This angered Israeli farmers, the vast majority of whom are farming according to heter mechira. They insist that ultra-Orthodox soldiers can be served special shmita meals.

In a letter to the Israel Farmers Association obtained by The Times of Israel, the IDF said that in order “to allow the entire IDF population to eat in a single kitchen, and in order to attain the national goal of drafting the ultra-Orthodox into the IDF” who do not abide by heter mechira, “the army rabbinate has decided to avoid procuring vegetables (grown under) the heter mechira for the first half of the sabbatical year, until the end of February 2015.”

The IDF said it will utilize the farmers’ products during the second half of the year.

Not only the army is affected. So too, are many other institutions.

The majority of the farms that donate food to Leket, Israel’s national food bank and the country’s largest food rescue network, abide by heter mechira. That means it will accept Israeli-cultivated crops.

Shaya Sheveks, director of Aleh B’Negev, said his organization, which feeds 800 needy families weekly with almost entirely donated food including some from Leket,  will be able to use potatoes and onions from almost all Israeli farms “until Hanukkah,” in December, when they are harvested, and citrus fruits until early 2015.

Hydroponically grown crops are another kosher option, he noted.

Even so, “I still anticipate some shortages,” he said.

While many Israelis consider shmita little more than the imposition of an archaic law by the religious establishment, some have embraced the commandment’s emphasis on renewal and social equality.

“I’m hearing a lot of discussion about environmentalism, natural resources, abstinence from the obsessive pursuit of material wealth and biblical sources,” said Rabbi Alan Haber, an Orthodox Israeli rabbi who has written extensively about shmita.

Biblical laws also call for a kind of supersabbatical year once every 50 years, called a jubilee or yovel in Hebrew. The laws of redemption were intended to prevent the widening of a gap between rich landowners and a permanent landless underclass. The biblical laws require forgiveness of debts and release of indentured servants.

“In biblical times shmita was a great equalizer between rich and poor,” he said. “I think there’s an attempt to connect to authentic parts of Jewish tradition and implement them in modern times.”