The opening hymn by the Mormon Tabernacle Choir.

At the end of this morning’s LDS General Conference session, someone tweeted a question that was also on my mind: what was the overarching main theme?

There were several exciting incidents, from the first foreign-language address (Cantonese FTW!) to female auxiliary leaders being on the stand with the men. Not to mention Pres. Eyring’s adorable flub: he was so eager to hear from The Dieter that he seemed to forget to announce the intervening hymn.

With all that I was hard pressed to identify a single theme. It strikes me instead that two danced together in a delicate tango: agency and obedience.

It’s become an old chestnut that Mormon beliefs glorify human freedom while our practices appear to stress its exact opposite, obedient conformity.

That caricature is only helpful to a point, but it’s certainly true that some conference talks in the past have gone out of their way to hammer home the point of obedience.

One tweeter at a previous conference swigged a caffeine-free soda every time a speaker mentioned “obey” or “obedience.” Let’s just say it was a good thing Mormons don’t drink alcohol, or she would have passed out drunk after about the first half hour.

I can’t remember any conferences that have hammered agency in quite the same way. But holding both those values in tension is what helps Latter-day Saints grow more like our heavenly parents, and there was a lovely balance between them this morning.

Readers of this blog already know that I probably lean too far into the agency camp, so it won’t surprise you that the talks I appreciated most were the ones that stressed our human freedom to explore and grow and change – and the provisional nature of the knowledge we think we already have.

For example, President Uchtdorf reminded us that while some truths are unchanging, our ability to perceive those truths is changing all the time – hopefully for the better. Those who judge with total certainty may be well-meaning and sincere in their beliefs, but ultimately wrong. So what hope is there for any of us to escape our biases?

There isn’t, at least not on our own steam, though there are ways we can exercise our agency in faith by nurturing the desire to believe and honing the spiritual instruments that might lead us to truth. Whatever testimony we gain this way may be imperfect but, it’s also permanent; he made the point that we do take it with us into the eternities. 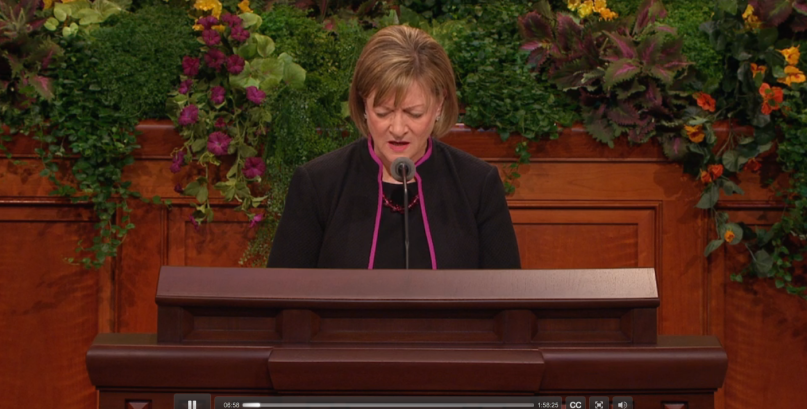 Also in the agency camp were Sister Esplin’s excellent talk on preparing spiritually for the sacrament and Elder Christofferson’s focus on personal responsibility. He played up our freedom by noting that we shouldn’t blame God for our problems or pain, attempting to sidestep hard work.

But other talks, especially one by Elder Lynn Robbins of the Seventy, focused on the importance of obedience to Church leaders, no matter what the world around us may suggest is right.

Several people online noted that his words could be interpreted as criticizing folks (like me) who question the Church’s teachings on homosexuality, for example, but he never came right out and identified a particular issue. He did emphasize that as a Seventy, his job was to represent the prophet to the people rather than the people to the prophet, reflecting the Church’s top-down approach to authority.

I didn’t care much for that way of seeing things; why would his role have to be one or the other?

Still, this view of obedience is ballast, a counterweight. Mormons, like all Christians, need both agency and obedience to work in tandem, this one in ascendance here, that one trumping all else there.

And this morning’s session presented both in dynamic tension . . . as it should be.