Video courtesy of USA Today
WASHINGTON (RNS) The Supreme Court’s decision to sit out the legal battle over same-sex marriage will — for now, at least — leave the future of laws prohibiting gays and lesbians from marrying in the hands of lower state and federal court judges. But it also almost certainly means the couples challenging those laws are more likely to win in the end.

The court said Monday (Oct. 6) that it would not hear appeals from five states whose same-sex marriage bans had been invalidated by lower federal courts. The decision, issued without explanation, will likely lead to recognition of gay marriages in 11 more states. It also allows an avalanche of legal challenges to the remaining bans to keep going forward in state and federal courts, where gay and lesbian couples have overwhelmingly prevailed.

The court’s decision leaves unchanged 20 state laws blocking same-sex unions. Each is already under legal attack, facing challenges in state or federal court, and sometimes both. Challenges to marriage bans already have reached a handful of state appeals courts and the federal appeals courts for the 5th, 6th, 9th and 11th circuits.

Some of those judges had been waiting to see what the Supreme Court would do. The court’s instruction Monday was: Proceed.

Technically, the Supreme Court’s decision doesn’t dictate how those lower court cases should come out. But it sends a signal that’s hard for lower court judges to ignore.

“It’s inevitable that judges on lower courts will be thinking about what this means,” said University of Michigan law professor Sam Bagenstos. “Lower court judges hate to be reversed. They’re always trying to predict what the Supreme Court will do, and I’d be shocked if they aren’t taking this into account.”

No federal appeals court has yet upheld a state law prohibiting same-sex unions. But judges on a 6th Circuit panel hearing a challenge to four state laws earlier this year expressed skepticism that the Constitution requires states to recognize those marriages. And two of the lawsuits are now in front of the conservative judges of the 5th Circuit. If either of those courts upholds a state ban, the justices might be faced with a marriage case that would be harder to sidestep.

And that might be the long-term upshot of Monday’s decision.

By letting gay and lesbian marriages go forward in 11 other states, the justices almost certainly made it harder to reverse course in the future, Yale law professor William Eskridge said. If they do, he said, the court would have to do more than simply prohibit some couples from marrying; it would have to invalidate marriages that have already taken place. “It will become very hard for the Supreme Court to take that back,” Eskridge said.

Here’s where the legal challenges stand, broken down by circuit:

Louisiana: A federal judge in New Orleans upheld the state’s ban earlier this year. The decision was one of only a handful of victories for states since the Supreme Court struck down part of the Defense of Marriage Act in 2013. The plaintiffs in that case appealed to the 5th Circuit, which will hear the case later this year. Separately, a state judge ruled last month that Louisiana’s ban is unconstitutional. State officials are appealing that decision to Louisiana’s Supreme Court.

Mississippi: A state court judge last year refused to divorce a lesbian couple, who had been married in California, because Mississippi did not recognize their marriage.

Mark Phariss and Vic Holmes (wearing dark blue shirt), of Plano, Texas, relax on a hammock while they enjoy a Saturday at their lake house in Gun Barrel City, Texas on May 31, 2014. Phariss and Holmes are plaintiffs in the main Texas lawsuit seeking same-sex marriage rights. Photo by Mei-Chun Jau, courtesy of USA Today

Texas: A federal judge invalidated Texas’ ban in February. The state appealed that decision to the 5th Circuit. The plaintiffs in that case asked the appeals court to speed up the case on Monday, saying they wanted to have it resolved — and be married — before their second child is born. Texas indicated it would oppose speeding up the appeal.

Three appeals court judges heard arguments in August on challenges to same-sex marriage bans in all four states covered by the 6th Circuit. Unlike in other circuits, at least two of those judges expressed some skepticism that the Constitution requires states to recognize same-sex marriages. Monday’s decision does not technically dictate the outcome of those cases, and because they heard the case two months ago, the judges may have already made up their minds. They are expected to rule by the end of the year.

Kentucky: A federal district court judge struck down Kentucky’s ban in July. The 6th Circuit is expected to decide the state’s appeal later this year. 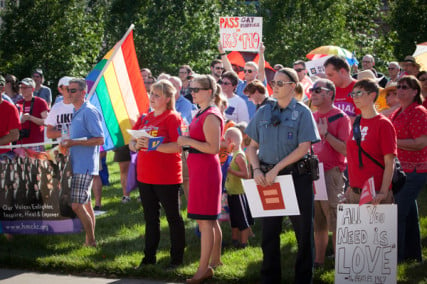 Ohio: A federal judge in Ohio struck down the state’s ban in April. The 6th Circuit is expected to decide the state’s appeal later this year.

Tennessee: A federal judge ordered Tennessee officials to recognize the marriages of three couples challenging that state’s ban. The 6th Circuit is expected to decide the case later this year. A state court judge in August rejected a separate challenge to the state’s law.

Arkansas: State officials have asked Arkansas’ top court to overturn a state court judge’s decision invalidating a ban there. The state appeals court has blocked the decision from taking effect until it can hear the case.

Missouri: A state court judge last week overturned part of Missouri’s ban. The ruling requires Missouri officials to recognize same-sex marriages performed in other states. State officials said last week that they were reviewing the decision but had not immediately appealed. A separate federal lawsuit challenging the state’s ban is also pending.

Nebraska: The state’s top court heard a challenge to Nebraska’s ban earlier this year but ultimately rejected the case for procedural reasons. A federal judge had ruled Nebraska’s ban unconstitutional in 2005, but the decision was quickly reversed by the 8th Circuit. That ruling is unlikely to dictate the outcome of new federal lawsuits in that circuit, however, if for no other reason than that the Supreme Court’s decision overturning part of the Defense of Marriage Act last year has so dramatically altered the legal landscape.

North Dakota: A challenge to the state’s ban by seven same-sex couples is pending in federal court.

South Dakota: Six same-sex couples filed a federal lawsuit in May seeking to overturn the state’s ban. That case is pending.

Alaska: A challenge to Alaska’s ban is pending in federal court, where it is scheduled to be heard later this month.

Idaho: State officials have appealed a district court judge’s decision invalidating the state’s ban. The 9th Circuit heard arguments in the case in September and is expected to decide soon.

Nevada: Three couples have appealed a district court judge’s decision upholding the state’s ban. The 9th Circuit heard arguments in September and is expected to decide the issue soon.

Alabama: At least three challenges are pending in federal court.

Florida: A state appeals court is set to decide the future of Florida’s ban, which was invalidated by a lower state court judge. Attorney General Pam Bondi had asked the appeals court to delay hearing the case until after the Supreme Court had weighed in; now that it has, the case can go forward. Separately, a federal judge in Tallahassee ruled the state’s ban was unconstitutional in August. Florida officials have appealed that decision to the 11th Circuit.