WASHINGTON (RNS) A small band of Jews and Muslims marched through one of the city’s busiest squares Tuesday (Oct. 14) shouting “Spread Hummus! Not Hate!” and trying to draw the attention of an otherwise blase group of workers lined up at food trucks. 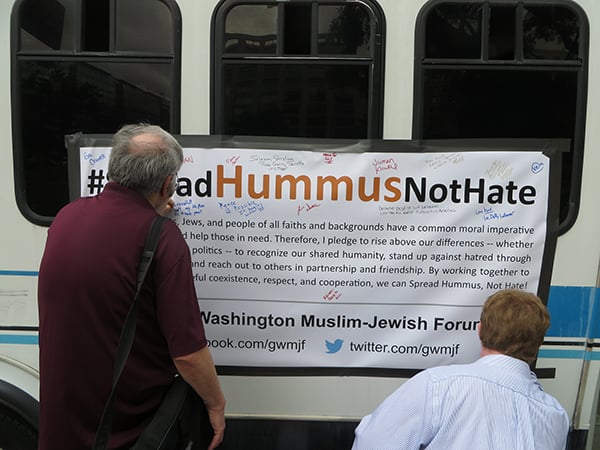 Sympathizers sign the “Spread Hummus Not Hate” banner on a bus parked at Farragut Square in Washington, D.C. Tuesday (Oct. 14), part of a campaign by the Greater Washington Muslim-Jewish Forum, a group of Muslims and Jews that formed earlier this year to combat Islamophobia and anti-Semitism. The group’s one-day bus tour took it to six stops including the University of Maryland, a D.C. mosque and a private home in Virginia. Religion News Service photo by Lauren Markoe

Many in the lunchtime crowd kept their earbuds firmly in their ears or continued chatting with their co-workers. But a few people joined in to sing “Salaam, Shalom,” a tune with the words for peace in Arabic and Hebrew, or to pen a comment on the side of the “#SpreadHummusNotHate” bus.

The one-day bus tour began at the University of Maryland, traveled to a mosque in D.C. and ended at a private residence in Virginia. It was designed to counter anti-Islam ads that appeared months ago on D.C. city buses. Similar ads still circulate on New York City buses.

Organized by the newly formed Greater Washington Muslim-Jewish Forum, the “#Spreadhummusnothate” bus tour served up pita bread and hummus — a chick pea dip savored by Jews and Muslims alike — at most of its six stops.

“Muslims and Jews have a common moral imperative to better the world,” said Juman Khweis, a Muslim member of the group who took a microphone and stood on a wooden crate labeled “soap box” to deliver her message in Washington’s Farragut Square. 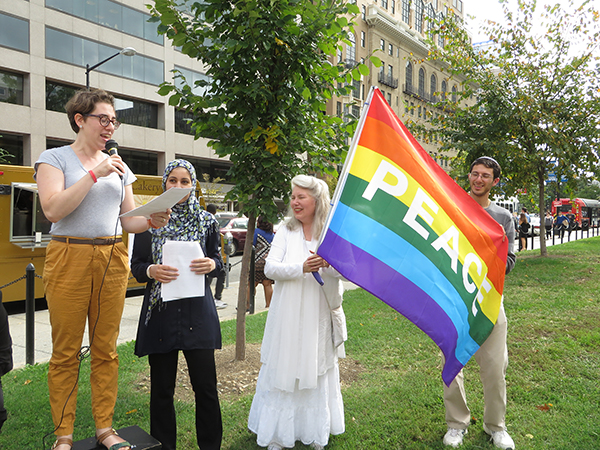 At Farragut Square, just block from the White House, members of the Greater Washington Muslim-Jewish Forum, a group of Muslims and Jews, speak out against Islamophobia and anti-Semitism. Their “Spread Hummus Not Hate” bus tour takes aim at anti-Islam ads that ran on D.C. buses earlier this year and still run on buses in New York City. Religion News Service photo by Lauren Markoe

The ads that inspired the hummus campaign were bought by the American Freedom Defense Initiative, a group led by Pamela Geller. Those ads, which many Jews and Muslims found offensive, read: “In any war between the civilized man and the savage, support the civilized man. Support Israel. Defeat Jihad.”

“We must do everything in our power to counter fear and mistrust and must not allow negative feelings to fester between our communities,” said Symi Rom-Rymer, a Jewish member of the group who spoke out in the square.

This was the first public event for the Greater Washington Muslim-Jewish Forum, created under the auspices of the Foundation for Ethnic Understanding, a national group of Muslims and Jews.

Walter Ruby, Muslim-Jewish program director for the FFEU, said the aim is to teach Muslims and Jews about each other’s faith so they could come to each other’s defense when incidents of anti-Semitism or Islamophobia erupt in greater Washington, D.C.