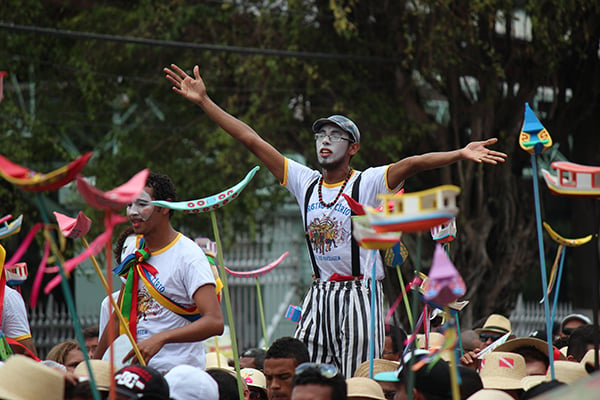 A reveler holds up his hands during a Cirio music and dance celebration. Photo by Chad Richard.
October 17, 2014
Benjamin Soloway 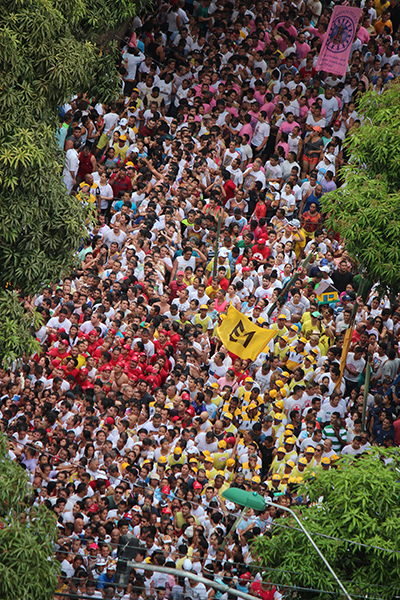 In the second week of October, over 2 million people fill the streets of Belem, a port city near the mouth of the Amazon, for Cirio de Nazare, Brazil's largest yearly religious event. Photo by Chad Richard

BELEM, Brazil (RNS) More than 2 million worshippers, pilgrims and onlookers poured around an 11-inch wooden figure of the Virgin Mary as it made its way through the streets. A crush of the faithful heaved and hauled away at a rope that stretched over a thousand feet from the cart that bore the beloved statue, dragging it inch by inch through the sweat-soaked crowd. Bursts of fireworks marked its passage.

Cirio de Nazare is Brazil’s largest religious event of the year and it takes place at the mouth of the Amazon in the northern state of Para.

Celebrated the second weekend of October, the observance, a Roman Catholic processional and a series of celebrations and traditions that have sprung up around it, draw participants from across Brazil, almost doubling the size of the small port city.

An arduous public display of devotion, Cirio (pronounced see-rio) has persisted and thrived as a centerpiece of Amazonian regional culture -- maintaining consistent levels of participation year to year -- even as Catholicism loses ground to evangelical faiths in a dramatic transformation of Brazilian society.

According to a report released last year by the Pew Research Center, the number of Brazilians who identified as Roman Catholic fell to 65 percent of the population in 2010, down from 74 percent in 2000. The Protestant population grew 7 percentage points over the same period -- a trend seen widely across Latin America. More Catholics remain in Brazil than in any other country, but the numbers slipped rapidly.

The Brazilian Institute of Geography and Statistics, which drew upon the same census data, found that Belem had fewer Catholics and a greater share of evangelicals than the national average.

But in Brazil, where African and indigenous traditions melded with Christianity for centuries and where Catholicism has deep cultural roots, religious identities are not so clear-cut.

“Many of the worshippers of Pentecostal churches accompany Cirio,” said Raymundo Heraldo Maues, a professor of anthropology and expert on Cirio at the Federal University of Para.

Social scientists sometimes struggle to reconcile the ways people identify themselves with the ways they actually behave, said Alan Cooperman, director of religion research at the Pew Center.

A reveler holds up his hands during a Cirio music and dance celebration. Photo by Chad Richard.

“People’s self-definitions almost never wholly line up with what others think are the normative beliefs and practices that should go with those self-definitions,” he said.

Most evangelical churches in the region admonish followers to steer clear of Cirio, but the warnings often fall on deaf ears. Others aren’t as harsh. Members of the Assemblies of God, the largest Pentecostal church in Brazil, distributed food and water along the procession.

“People are against Cirio,” said Wanessa Nunes, 20, who grew up Catholic but now attends a nearby Baptist church that shuns the festival. “They say that any connection that you have with it counts as idolatry.” Nevertheless, she turned out to watch the procession and even considered “going on the rope”: helping pull the figure to its resting place in the Basilica de Nazare. 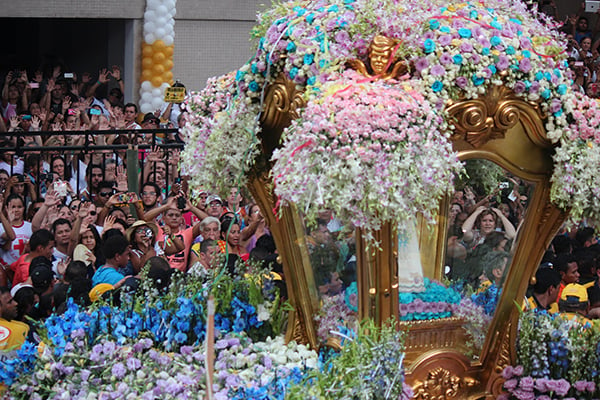 Worshippers accompany an eleven-inch figure of the Virgin Mary as it winds its way through the streets of Belem during the Cirio procession. Photo by Chad Richard

During the Sunday (Oct. 12) procession, worshippers jostled for a glimpse, or even better to touch the cart or the rope, as the wooden figure of Our Lady of Nazareth -- known locally as “Our Queen of the Amazon” or “Our Little Saint” -- ensconced in polished glass, trundled along.

Those who positioned themselves near the center of the processions were swept along at a plodding pace for almost six hours over a short distance, but through a harrowing gauntlet of teeming crowds and oppressive heat.

Some crawl the whole route on their knees, to ask the Virgin for a favor or thank her for an intercession.

Many collapsed along the way. Twenty Red Cross stations lined the route, manned by hundreds of volunteers who rushed into the tumult to carry the fallen to safety.

“In Umbanda, we worship the saints, so it’s normal for us to celebrate Cirio,” said Belem resident Edson Elias, over a traditional Cirio meal in his home.

“Many people from other religious groups participate in Cirio and in it find a welcoming environment,” said Belem Archbishop Alberto Taveira Correa in an email.

Cirio has been celebrated for 222 years, first inspired by a local man named Placido Jose de Souza, who stumbled across a long-lost carved statue of Virgin Mary by the side of a creek. According to legend, every time he brought the figure away with him, she would stubbornly return to the place where he had discovered her -- the spot where the basilica now stands.

The original Mary is now shut away, too venerated to risk damage in the streets. In its contemporary iteration, Cirio is no longer just a religious event, but has grown to incorporate cultural, and even countercultural, celebrations.

“Its not just religious, but part of the culture of the state of Para,” said Belem Mayor Zenaldo Rodrigues Coutinho Jr. The church and the city worked together to have the proceedings inscribed on the UNESCO World Heritage list last year.

Cirio, like many Brazilian religious festivals, brings with it a fair share of the profane along with the sacred, including live music and boozy dance parties. Most iconic of all is Festa da Chiquita, a late-night, open-air LGBT party the night before the procession that draws up to 700,000 revelers.

Chiquita began in 1978 as a parody of Cirio, and remains so today, but it has woven its way into the fabric of the Cirio weekend, and has become an indispensable element of the festival itself.

“We think the church isn’t that saintly and the profane isn’t that profane,” said Eloi Iglesias, a local gay icon and the organizer of Chiquita. “All of these queers are Catholics.”