Shia LaBeouf at the premiere of Fury | Photo by DoDNewsFeatures via Flickr (http://bit.ly/1wrMBzn)

Shia LaBeouf had a lot to say about, well, a lot of different things in a recent conversation with Interview Magazine. He talked about his troubled relationship with his dad, about stalking Alec Baldwin after being cut from a play they were both in, and shared his philosophy on online community (he’s not a big fan). But the part that’s got people talking has to do with his recent conversion of sorts.

I found God doing Fury. I became a Christian man, and not in a f***ing bullshit way—in a very real way. I could have just said the prayers that were on the page. But it was a real thing that really saved me. And you can’t identify unless you’re really going through it. It’s a full-blown exchange of heart, a surrender of control. And while there’s beauty to that, acting is all about control. So that was a wild thing to navigate.

LaBeouf claims this decision was deeply influenced by Fury costar Brad Pitt and director David Ayer. Pitt, who famously comes from an evangelical family, is firmly in the spiritual-but-not-religious camp, while Ayer “is a full subscriber to Christianity…these two diametrically opposed positions both lead to the same spot, and I really looked up to both men.”

If that isn’t enough LaBeouf for you, make sure to watch the best video made last week about him, featuring the Gay Men’s Chorus of LA. 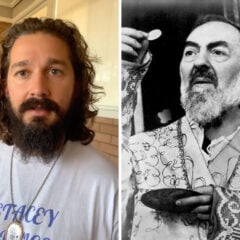