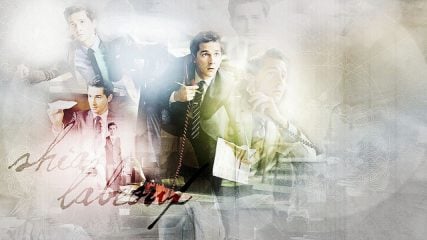 Remember when we were all so surprised that Shia LaBeouf had converted to Christianity while filming Fury? The news stormed through the Internet on Friday: Shia LaBeouf? The guy who grabbed Alan Cumming’s ass on Broadway and wore a paper bag over his head? The kid from Even Stevens and Transformers? And he became a Christian by talking with Brad Pitt and Fury director David Ayer? We ate it up. It’s a great story.

Except, I’m pretty sure, it’s not true. Not in the way we all thought it was, anyhow. And the thing that made me realize I had been wrong? Seeing Fury.

In Fury, LaBeouf is Technician Fifth Grade Boyd “Bible” Swan, a devout Christian who can quote chapter and verse from the book of Isaiah with the same ease he can load the tank gun. Perhaps LaBeouf was so moved by this experience that he sincerely bought into a new set of beliefs. But the part that I think so many of us missed last week-the part that became clear as a bell to me after seeing the movie-was that LaBeouf was talking about method acting.

We know that LaBeouf is a proponent of method acting because he has done a number of disturbing things in order to remain “in character” while filming or auditioning for a role. He sent a picture of his penis, for example, to the production team of Lars von Trier’s Nymphomaniac. While filming Fury, both Pitt and Ayer expressed concern over LaBeouf’s decision to pull his own tooth and spend weeks without showering in order to better empathize with his character.

The most revealing affirmation of this theory comes from the film’s director himself. In an interview with Esquire, David Ayer said of Shia’s public antics “He’s manipulating people. It’s like performance art. It’s very conscious on his part.”

So, let’s look at the actual statement. I realize some people won’t be convinced, especially those who really want to believe that LaBeouf is a Christian now because having famous people on “our” side makes “our” case stronger. But after seeing the film and re-reading the interview, I’m sure that Shia was laughing his way to the bank over all the hubbub.

“I found God doing Fury.” “While I was filming a movie in which my character was a Christian, I pretended to also be a Christian.”

“I became a Christian man, and not in a f**king bullshit way—in a very real way. I could have just said the prayers that were on the page. But it was a real thing that really saved me.” “I became a Christian for the sake of my role, and my acting was better because of it. I didn’t just say the prayers on the page, I really meant them. During the movie. Which I was acting in.”

“And you can’t identify unless you’re really going through it. It’s a full-blown exchange of heart, a surrender of control. And while there’s beauty to that, acting is all about control. So that was a wild thing to navigate.” “It was hard to let go of control when I was acting and surrender to the principles of method acting, which include embracing the whole persona of your character. That was wild! But now that it’s over, I am not playing a role any longer and do not believe it.”