ROME (RNS) Just in time for Halloween and against an unspecified “steady increase” of demonic possession, Pope Francis thanked exorcists for showing the church’s “love for those possessed” by the devil.

About 300 exorcists from around the world attended a convention in Rome last weekend (Oct. 25-26) and their spokesman later expressed concern about the number of people turning to Satanism and the occult. 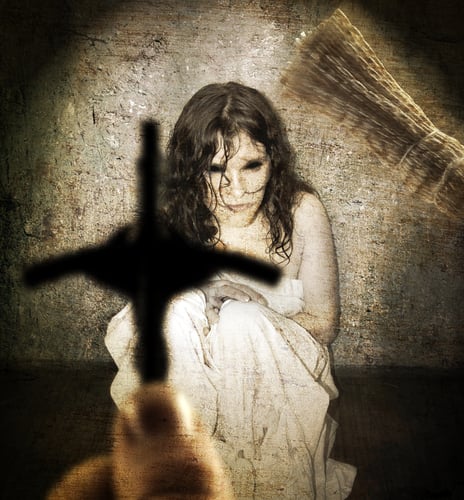 An exorcist and a woman possessed by the devil.

In a message sent to the Rev. Francesco Bamonte, who heads the International Association of Exorcists (known as AIE), Francis urged the experts to demonstrate “the church welcomes those suffering from the devil’s work.”

Without citing specific numbers, AIE spokesman Valter Cascioli told Vatican Radio there has been a “steady increase” in the number of people turning to demonic practices and they are left suffering from serious spiritual and psychological damage.

“We are living in a particularly critical time in history, where urgency, superficiality, exasperated individualism, secularization seem to almost dominate our culture,” Cascioli said.

“The battle against evil is becoming more of an emergency. We are calling for major vigilance.”

Last May, priests and lay people gathered in Rome for a six-day course conducted by the Legionaries of Christ and Catholic researchers on how to carry out exorcisms and meet the growing demand for their services.

The AIE was formally recognized by the Vatican in June.

The church’s most famous exorcist, the Rev. Gabriele Amorth, now 89, claims to have conducted more than 50,000 exorcisms during his career. He has just released a new book in Italy entitled “The Devil: A Contemporary Inquest.”

“Speaking about the devil is never easy, but it interests everyone, ” he told an Italian daily this week.