LYNCHBURG, Va. (RNS) The big news this week is that Apple CEO Tim Cook is gay. While our personal theologies might not line up on every account, I can tell you that his perspective on sexuality is one that I find both thoughtful and refreshing.

In a Bloomberg Businessweek op-ed on Thursday (Oct. 30), Cook shared that he treasures being gay because it has given him a “deeper understanding of what it means to be in the minority and provided a window into the challenges that people in other minority groups deal with everyday.”

"While I have never denied my sexuality, I haven’t publicly acknowledged it either, until now," Cook wrote. "So let me be clear: I’m proud to be gay, and I consider being gay among the greatest gifts God has given me." Cook has remained fairly private since he was named Apple’s CEO in 2011, shortly before the death of founder Steve Jobs. This announcement is a shift -- for him, for Apple and the larger corporate world. But it's also a shift he clearly believes is worth the sacrifice.

Cook is willing to allow what he has experienced -- the difficulties, the painful moments, the times he felt less-than -- to encourage others. I’m sure his life has offered him a smorgasbord of challenges and yet he has risen to become one of the most successful entrepreneurs in the U.S. But never along the way has he allowed one aspect of his life to become the definer of his life.

“Part of social progress is understanding that a person is not defined only by one’s sexuality, race, or gender,” Cook wrote. “I’m an engineer, an uncle, a nature lover, a fitness nut, a son of the South, a sports fanatic, and many other things. I hope that people will respect my desire to focus on the things I’m best suited for and the work that brings me joy.”

In a time of adamant activism and partisan politicking, Cook’s words seem to be a rare commodity. With pro-gay, anti-gay, and I-don’t-know-yet-gay groups advocating for one thing or another, the individual lives behind these labels of sexual orientation have been lost.

Granted, Cook admits that he works in a field that is innovative, creative, and fairly open-minded, so he has been placed in the best of situations. But I bet it hasn’t always been that way. Had he allowed his sexual orientation to define who he was -- had he been gay first, and an intelligent human being, capable of greatness, second -- he might not be where he is today. 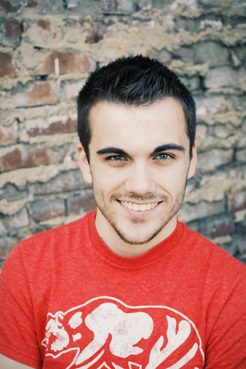 This is not to say that one’s sexual choices and orientations are unimportant. Because they are. They just do not, or should not, box us in, hold us back, or shut us down. These individuals are human beings first -- intellectuals first, entrepreneurs first, engineers first, visionaries first, artists first.

We are human beings with innate value -- first.

At the end of the day, we have to find common ground. Common ground is what makes the world continue to move, grow and advance. Cook gets it. He understands the weight of his announcement. He understands its importance, but also sees that there are things in this life of even greater importance -- what it means to be human.

I’ve found my common ground and, in Cook’s own words, “We pave the sunlit path toward justice together, brick by brick. This is my brick.”

(Tre Goins-Phillips is a student at Liberty University in Lynchburg, Va., and the opinion editor at the student-run newspaper, the Liberty Champion.)