BERKELEY, Calif. (RNS)  Step into the one-room art gallery inside the Pacific School of Religion  and look closely at the saints in the paintings:  Some have beards; some have buzz cuts; some have their breasts obscured; some appear in unisex clothes like tanks tops and jeans.

Are they women or men?

That’s the point of artist Alma Lopez’s new show, “Queer Santas: Holy Violence,” on display at this theological school known for its embrace of lesbian, gay, bisexual and transgender persons. In playing with the gender characteristics of religious icons usually depicted as feminine, Lopez asks us to reconsider our ideas of religion, beauty and gender. 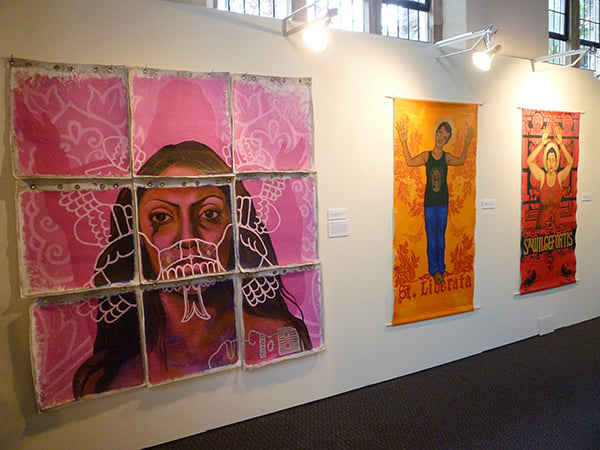 Justin Tanis, who teaches at the school, said it’s as if these saints, with their direct eye contact and open arms, are saying, “‘I am natural, I am one of God’s people.’ And yet this is an image that many people would consider heretical because gender play is involved.”

Gender play is at work in each of the icons in the show — St. Lucia, St. Wilgefortis and St. Liberata – on display in the Doug Adams Gallery and is presented by the Center for the Arts, Religion, and Education. 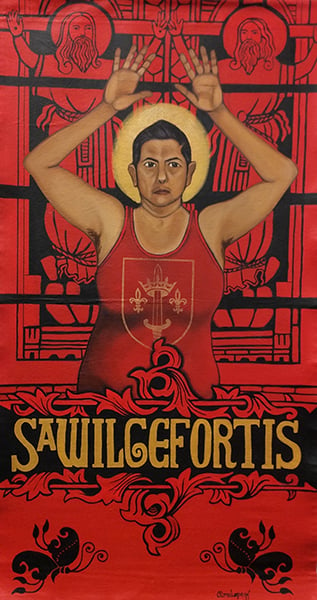 Lopez, a visiting artist at the University of California, Los Angeles, said she was attracted to these saints because their stories have a common theme — each one tried to step out of the expected role for a woman of her time and, as a result, was the victim of terrible violence.

Take St. Wilgefortis’ story. A 14th-century noblewoman promised in marriage without her consent, she prayed to God to be made ugly so she could keep a vow of chastity she made to Jesus. God granted her a man’s beard. The marriage was off — but Wilgefortis — whose name means “strong face” — was crucified by her father.

The stories of St. Liberata and St. Lucia are similar — Liberata sprouted a beard and Lucia had her eyes torn out when she disappointed her family.

“All of these saints are women who took their own agency and stepped outside gender norms,” Tanis said as he stood before Lopez’s rendition of St. Liberata, arms splayed in a way that suggests both crucifixion and winged flight. “In that sense, they were queer and violence was done to them for it.”

Speaking by phone from her home in Southern California, Lopez, 47, said she was drawn to the stories of these saints because of their refusal to conform to the social norms expected of women in their times — much the way lesbian, gay, bisexual and transgender people today do.

“I think many of us would refuse to submit to something that we do not believe in, especially when it has something to do with identity,” she said. “In our community, we do endure so much because we believe in certain things and we know ourselves. So I wanted the Queer Santas to stand for that and start a discussion of how much we endure to be who we are and love who we want to love.” 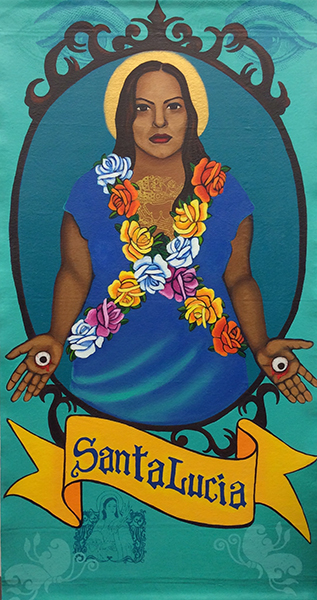 Alma Lopez’s version of Santa Lucia confronts the viewer with a direct gaze — and her torn-out eyeballs in her hands. Photo courtesy of Alma Lopez

For models, she used her own wife and friends, drawn by their own combination of female and male characteristics.

“So it is really me painting their masculinity and their beauty through the story of the Santas,” she said, using the Spanish word for female saints.

The show also includes a work Lopez is most famous for — a 1999 representation of the Virgin of Guadalupe who is partially nude and clad in a robe decorated with the image of Coyolxauhqui, an Aztec moon goddess who was murdered by her brother. A bare-breasted woman with butterfly wings holds the virgin on her back as the virgin stands with arms akimbo, confronting the viewer with a daring gaze.

When the work appeared in a New Mexico show in 2001, it sparked an international controversy. Protests from Catholics followed the work to shows in Oakland, Calif., and Cork, Ireland. Like the saints in the current show, Lopez and museum officials received verbal and physical threats.

Also included in the “Queer Santas” show are several images of “sirenas,” or mermaids — another opportunity to play with gender. Lopez said she took the images from Mexican “loteria” game  – similar to bingo – she had as a child and included them in this show because they also play with gender — their genitals are obscured by a fish tail and their breast are covered by shells, hair or hands. 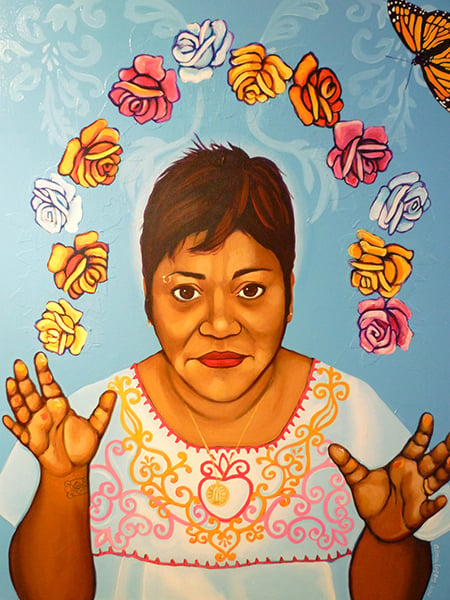 This self-portrait by artist Alma Lopez features images of change central to most of her works — butterflies, roses and wings. Religion News Service photo by Kimberly Winston

In the loteria cards, the sirena “is the only one who is a hybrid,” Lopez said.

At the gallery talk, Tanis said his research showed that some young transgender girls have adopted the sirena as a symbol of the exploration of their own identity.

And as for the controversy Lopez’s art often attracts, this time there’s been none. In fact, Tanis said, he’s walked into the gallery to find people sitting before the image in meditation or prayer.

“So far it’s been quiet,” he said. “But we are prepared to offer hospitality to any protesters.”