WASHINGTON (RNS) The same-sex marriage movement lost its first major case in a federal appeals court Thursday after a lengthy string of victories, creating a split among the nation's circuit courts that virtually guarantees review by the U.S. Supreme Court. 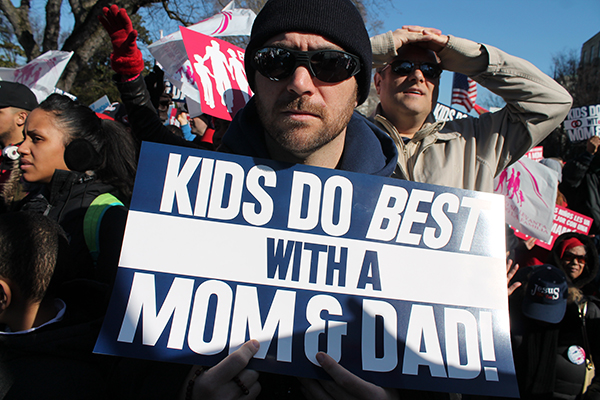 The National Organization for Marriage hosted its 2013 March for Marriage in front of the U.S. Supreme Court on March 26, 2013.

The 2-1 ruling from the Cincinnati-based 6th U.S. Circuit Court of Appeals reversed lower court rulings that had struck down gay marriage bans in Michigan, Ohio, Kentucky and Tennessee.

Circuit Judge Jeffrey Sutton, one of the Republican Party's most esteemed legal thinkers and writers, issued the 42-page decision precisely three months after hearing oral arguments in the cases, with fellow GOP nominee Deborah Cook concurring. He delivered a rare defeat for proponents of same-sex marriage, who had won nearly all the cases decided from Florida to Alaska since the Supreme Court ruled against the federal Defense of Marriage Act in June 2013.

Sutton argued that appellate judges' hands are tied by a one-sentence Supreme Court ruling from 1972, which "upheld the
right of the people of a state to define marriage as they see it." Last year's high court decision requiring the federal government to recognize legal same-sex marriages does not negate the earlier ruling as it applies to states where gay marriage is not legal, he said.

The same reasoning was used by a federal district court judge in Puerto Rico last month.

"When the courts do not let the people resolve new social issues like this one, they perpetuate the idea that the heroes in these change events are judges and lawyers," Sutton said. "Better in this instance, we think, to allow change through the customary political processes, in which the people, gay and straight alike, become the heroes of their own stories by meeting each other not as adversaries in a court system but as fellow citizens seeking to resolve a new social issue in a fair-minded way."

The six cases before the three-judge panel involved not only whether gays and lesbians should be able to marry, but whether marriages performed elsewhere should be recognized; whether same-sex couples should be able to adopt children; and whether their names should be placed on partners' death certificates.

Judge Martha Craig Daughtrey, a Democratic appointee, delivered a blistering 22-page dissent. She disputed Sutton's reasoning that judges should not decide the issue.

"If we in the judiciary do not have the authority, and indeed the responsibility, to right fundamental wrongs left excused by a majority of the electorate, our whole intricate, constitutional system of checks and balances, as well as the oaths to which we swore, prove to be nothing but shams," Daughtrey said.

BOTH SIDES LOOK TO SUPREME COURT

After enduring a prolonged losing streak, opponents of same-sex marriage were elated with the appeals court ruling. "This decision gives greater certainty that this matter will ultimately return to the Supreme Court, as we have said all along that it must," said Brian Brown, president of the National Organization for Marriage. "We think that the constitutionality of states' amendments on marriage will there be upheld."

Byron Babione, senior counsel at the Alliance Defending Freedom, said the court's ruling demonstrates that "the Constitution does not demand that one irreversible view of marriage be judicially imposed on everyone."

Proponents of same-sex marriage saw Sutton's opinion as an appeal to Supreme Court Justice Anthony Kennedy, who has authored the last three major rulings advancing the cause of gay rights. Kennedy has defended voters' right to pass constitutional amendments -- but he struck down the federal same-sex marriage ban as an affront to the constitutional rights of gays and lesbians.

Lawyers working on gay marriage cases from coast to coast wasted no time preparing for a Supreme Court showdown.

"We will be filing for Supreme Court review right away and hope that through this deeply disappointing ruling, we will be able to bring a uniform rule of equality to the entire country," said Chase Strangio, staff attorney for the American Civil Liberties Union.

The Supreme Court last month refused to reconsider the cases from Utah, Oklahoma, Virginia, Indiana and Wisconsin, at least in part because there was no conflict among the federal appeals courts. But Justice Ruth Bader Ginsburg told a Minneapolis audience that a ruling against same-sex marriage from the 6th Circuit panel would make Supreme Court consideration more urgent.

In his ruling, Sutton was not swayed by the earlier rulings from his appeals court colleagues. "Four courts of appeals thus far have recognized a constitutional right to same-sex marriage. They agree on one thing: the result. But they reach that outcome in many ways, often more than one way in the same decision," he said.

And he most certainly was not swayed by gay marriage proponents' arguments for why same-sex marriage should be legalized through the courts.

"Not one of the plaintiffs' theories ... makes the case for constitutionalizing the definition of marriage and for removing the issue from the place it has been since the founding: in the hands of state voters," Sutton said.

Thirty-two states and the District of Columbia allow same-sex couples to marry, including the five states from which the high court turned down appeals. Since then, eight additional states have been added to the list: Alaska, Arizona, Colorado, Idaho, Nevada, North Carolina, West Virginia and Wyoming. Three more states -- Kansas, Montana and South Carolina -- also are bound by the appeals court rulings.

The justices ruled 5-4 in June 2013 that the federal government must recognize same-sex marriages legally performed in states that allow them. They also refused to overrule a California court's decision striking down that state's ban.

Those rulings have led federal and state judges to overturn state bans in more than two dozen more recent decisions. The string of federal court victories was broken in early September in Louisiana, where a federal district judge upheld that state's ban. Then in October, a federal judge in Puerto Rico upheld the territory's ban.

The U.S. Court of Appeals for the 8th Circuit upheld Nebraska's gay marriage ban in 2006, long before the Supreme Court's ruling last year. But in deciding not to consider any cases recently, the justices clearly did not give that decision equal weight in determining whether the appeals courts were divided.