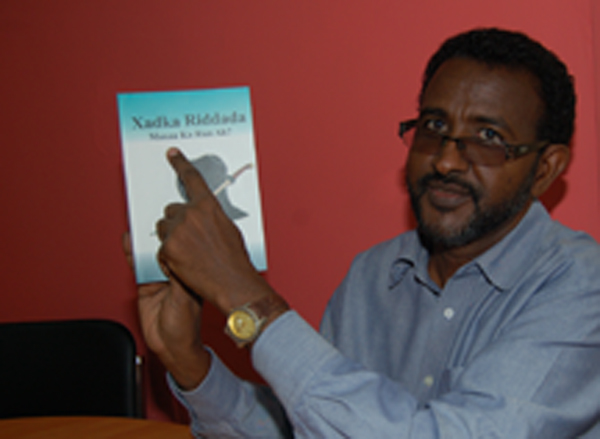 (RNS) Somali author Abdisaid Abdi Ismail has been threatened with death and labeled an infidel for his book, “The Rule of Apostasy in Islam: Is it True?” Religion News Service photo by Fredrick Nzwili

NAIROBI, Kenya (RNS) A Somali scholar is stoking Muslim anger after he published a book questioning the concept of the death penalty for apostasy in Islam.

Now, he is being branded as “Somalia’s Salman Rushdie” a reference to the British–Indian novelist whose book, “The Satanic Verses,” provoked worldwide Muslims protests and a fatwa from Iranian Ayatollah Khomeini in 1989.

Abdisaid Abdi Ismail’s book, “The Rule of Apostasy In Islam: Is it True?” was published in Kenya in September.

Ismail was following the Meriam Yahya Ibrahim case before starting work on the book. She is the Sudanese woman sentenced to death for converting to Christianity, but later freed. Her case outraged the world and drew attention to the growing abuse of apostasy in Islam. (Ibrahim said she has always been a Christian.)

The book, written in the Somali language, is being read in Western cities such as London, Toronto and Minneapolis, where there are large populations of ethnic Somalis.

Ismail said the book furthers the growing voice of Muslim scholars, intellectuals and prominent clerics worldwide who are increasingly rejecting the abuse of Islam by extremist groups such as the Islamic State, Nigeria’s Boko Haram and Somalia’s Al-Shabab.

“What we need are secular states where there is democracy, justice and equality for all,” he said. “Not theocratic ones where leaders rule by the name of God.”

Ismail’s concern is that Somali Islamic militants, clerics and other extremist groups in Muslim-majority countries are applying apostasy as a political tool, branding those with contrary opinions as apostates who need to be killed. He has watched Al-Shabab justify the deaths of those who oppose their hard-line interpretation of the Quran by branding them apostates. Somali civil servants, national army officers, local or international nongovernmental organization officials, are considered devil’s spies who deserve death, he added.

“I wanted to explain to my people the true meaning of apostasy in Islam,” he said.

A graduate of the Umm Al-Qura University in Saudi Arabia, Ismail, 50,  has written four other books on globalization and economics.

But he appears to have struck a raw nerve with the latest book, which he had hoped would stimulate a debate on religious freedom in Islam. The book also touches on other issues, such as gender equality and stoning adulterers to death in Islam.

“Apostasy is crime in Islam,” said Sheikh Abdallar Kheir, a religious scholar at Kenyatta University in Nairobi. “It is mentioned in the Quran and the traditions of the prophet. It is like treason.

“But there conditions and situations in which the rule is applied,” Kheir added. “It must be in an Islamic state, there must be dialogue and reasoning before it is applied, and it is applied if the person in the new faith causes disturbance to Muslims or the Islamic faith.”

Since the book’s launch, Ismail says he has received death threats, and warnings not to return to Somalia where his wife and three children still live. He has also been branded a devil and infidel on social media, with radical clerics calling for the banning and burning of his book.

He had traveled to Kenya to publish the book, since he could not find a willing publisher in Somalia. He was kicked out of hotels in Nairobi and Kampala, Uganda.

“Every day, I fear fanatical supporters of Somali extremists here in Kenya and Somalia may harm me,” he said. “I have been warned they may even try to kill me.”

But Ismail is defiant, saying the threats will not stop him from expressing his opinion on crucial religious debates. He views this as a way of reforming Islamic thought in Somalia, and rehabilitating and reconstructing his war-torn country.

But Ismail admits the subject is controversial and he only began researching and writing about it after it became clear that there was nobody brave enough to confront it.

Ismail’s book is selling secretly in Kenya and Somalia, after booksellers removed it from their shelves in the wake of Muslim clergy protests. It is available in the Somali language on Amazon.

News
In Kenya, faith groups work to resettle youth returning from al-Shabab
Follow us on Facebook!
Submit your photos to RNS