(RNS) ISIS terrorist rampages, waves of anti-Muslim hate speech and fear-mongering Islamophobia are inspiring an outburst of online activism in the form of Twitter hashtags.

The question is: Does it work, especially over the long term? 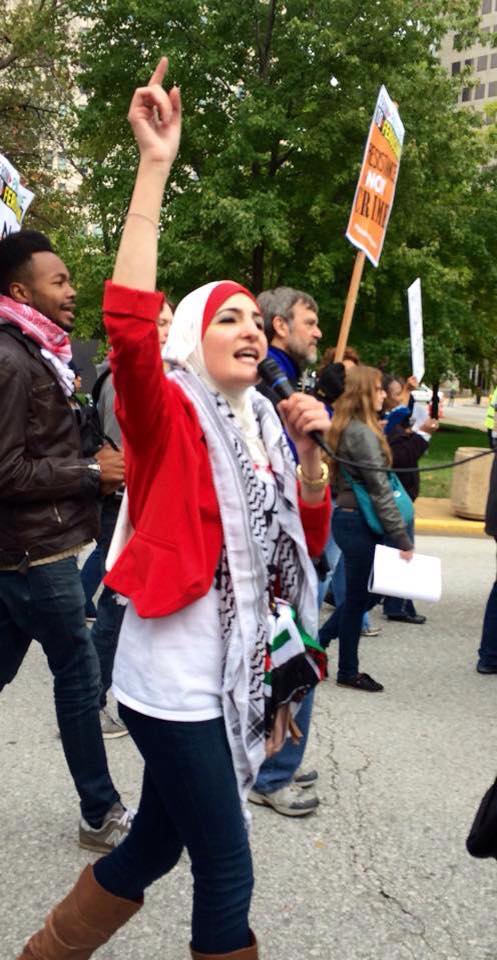 An army of “clicktivists” — a mix of earnest advocates and pointed satirists — has entered the fray armed with 140-character positive, peaceful or humorous counter-messages.

Using names such as #TakeOnHate, #ISpeakOutBecause, and #NotInMyName, the pushback approach promotes the complexity, diversity and positive contributions of Islam and Muslims. Others, such as #MuslimApologies, offer sarcasm in service of the same message.

Yet the hashtags are often immediately co-opted by trolls spewing an opposite message. And some experts question whether clicktivist campaigns have lasting worth.

Linda Sarsour has no doubt they do. She’s a Brooklyn-based Palestinian activist in the streets and on social media and a co-creator of #TakeOnHate. The hashtag is accompanied by a resource website, launched in March by the National Network for Arab American Communities.

“The insidious thing about anti-Arab hate speech is that it seems to be acceptable, where the ‘N-word’ or anti-Semitic remarks are not taken with the same degree of outrage,” said Sarsour, who was chased down the street in September by a man who was later arrested for threatening to behead her.

“Hashtags are temporary, but knowledge is not temporary… Once you learn something, you won’t forget you had that experience, that conversation. And you don’t have to wait for national TV to call to get your message out,” said Sarsour, noting that #TakeOnHate sees Twitter spikes whenever she’s on the airwaves.

She is a fan of the tongue-in-cheek #MuslimApologies, which shows “how ridiculous this is when you ask for 1.8 billion Muslims to apologize for a small group of people who are horrific.”

#MuslimApologies has small circulation — fewer than 5,000 tweets since Oct. 13, according to the Twitter analytics site Topsy.

@falasteenager tweeted “I’m sorry that Adolf Hitler doesn’t represent Germany, but Osama Bin Laden represents every Muslim and their mother.” In a video circulated by several tweeters, an unnamed man says, “I apologize for World War I and World War II, even if it has nothing to do with Muslims, but just in case.”

The hashtag parallels the more serious #NotInMyName campaign, in which people recite all the ways they reject terrorism in the name of Islam.

This isn’t the first clicktivist debut of #NotInMyName. The New York Times observed that the same slogan was used in 2003 to oppose the Iraq war and by Israelis this summer who condemned the war in Gaza.

The Active Change Foundation, a community organization in East London devoted to quelling street crime, gangs and violent extremism, also adopted #NotInMyName after the beheading of journalists and a British aid worker.

“Young Muslims are adding their voices to the fight-back against ISIS,” reads the campaign’s website. “#notinmyname gives you the opportunity to denounce their violent actions in your own words. Let your voice be heard rejecting the ideology of hate.”

So far, although tweets per day are down from nearly 1,000 to fewer than 400 since Oct. 13, according to Topsy, tweets in line with the hashtag’s original mission are running roughly even with trolls posting attacks.

Not so for the #ISpeakOutBecause hashtag campaign started by the Muslim Public Affairs Council. It began in August by inviting people on Facebook and Twitter “to tell the world why you are not afraid to speak out.” The Facebook page survived, but #ISpeakOutBecause has essentially devolved into a river of insults and denigration.

“The trolls organized immediately — almost the first day,” said Riham Osman, MPAC’s communications coordinator. “Initially, we fought back, but it was overwhelming.”

Osman said the lesson she learned is that hashtag efforts work if you can pinpoint an exact target, reach people with the power to make change and tell them exactly what you want.

She cites an example: After Wal-Mart advertised a “scary Muslim” costume for Halloween featuring a shaggy gray beard, skullcap and South Asian waist coat, Twitter outrage drove the retailer to dump the item.

Osman said ideas such as combating Islamophobia “are an easy target for hijackers because they are very broad. (The) free speech umbrella covers hate speech as well.”

Hate speech’s power resides in its ability to provoke fear, said Robert Perez, a branding and messaging strategist focused on social-change communications and founder of Wonderforgood.com.

“When fear is activated in your brain, it’s like loud emotional noise that almost drowns out your ability to empathize with others,” he said.

“Hearts-and-minds campaigns have to address fear. Hashtag campaigns are unlikely to lessen anxiety, fear and misinformation,” he said.

But that’s hard to do in a tweet, particularly when often the only people who see it are your personal followers who already agree with you.

“Not a lot of Americans know Muslims as friends and neighbors, so their understanding of Islam and Muslims is shaped by negative views. That gives a very distorted impression,” Perez said. “To help people have a fuller, more accurate and authentic understanding, we need to show stories, and bring people to face to face dialogue.”

Clicktivism’s success can’t be evaluated by tweet/retweet counts but by its contribution to the complicated matrix of social change, said sociologist Jen Schradie.

Clicktivism success can’t be evaluated by tweet/retweet counts but by its contribution to the complicated matrix of social change, said sociologist Jen Schradie. Photo courtesy of Jen Schradie, via Toulouse School of Economics

Schradie, a research fellow at the Institute for Advanced Study at the Toulouse School of Economics in France, studies the intersection of technology with social movements. “Social change happens for a lot of reasons, often through concerted efforts of organizations and through offline activism,” she said.

Even so, “it’s critical to confront hate speech,” and social media can allow someone who has never participated in the public conversation before to take a bold stance.

Ultimately, attention matters — for ill and for good.

“Attention has never been powerless,” said sociologist Zeynep Tufekci, an assistant professor at University of North Carolina, Chapel Hill.  She looked into the aftermath of the #bringbackourgirls campaign. (So far, Boko Haram still has hundreds of kidnapped schoolgirls and the viral hashtag traffic has subsided.)

Tufekci flips this around, asking: “What happens when attention itself is part of the reward structure for the cruel? … Attention, to a terrorist group, is often what the well-meaning, outraged response is to your two-bit Internet troll: it is the food that feeds them.”

Even so, Tufekci concluded in an essay for “Medium,” an idea-sharing essay site: “Despair and throwing up one’s hands in disgust is … the luxury of the unafflicted.”