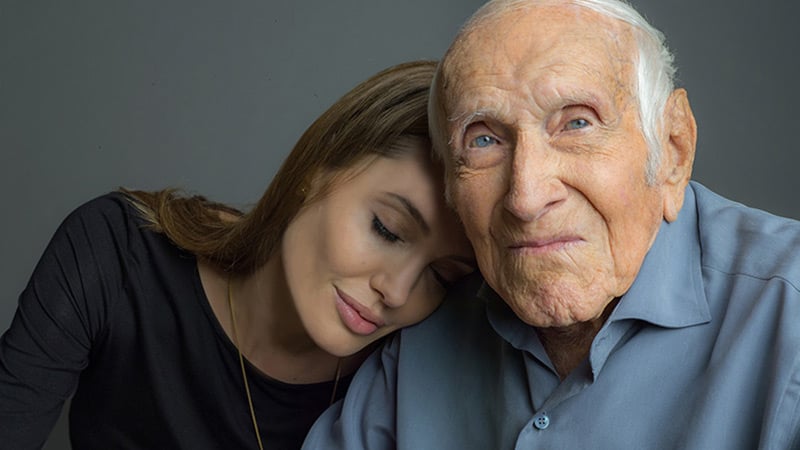 NEW YORK (RNS) Angelina Jolie’s highly anticipated film “Unbroken” features the true story of an Olympian and World War II veteran who was only able to extend forgiveness to his captors after he encountered Christianity.

The problem? The Christianity that is central to Louis Zamperini’s life is almost entirely absent from the film.

That could prove a disappointment to Christian viewers who read the best-seller by Laura Hillenbrand that spawned the film, or who have been courted by the filmmakers to see the film, which opens in theaters on Christmas Day.

The question is whether Hollywood can lure faith-based audiences with a story that’s based on faith but doesn’t pay much attention to it, especially against the blockbuster biblical epic “Exodus,” which opens on Dec. 12.

“Unbroken” features the real-life story of Zamperini, whose plane crashed in the Pacific during World War II. After spending 47 days adrift at sea, he spent two years as a Japanese prisoner of war.

After the war, he wrestled with addiction and his marriage nearly ended in divorce. All that changed in 1949, when he attended a Los Angeles crusade by an up-and-coming evangelist named Billy Graham. The two would team up together during later crusades.

“Unfortunately early reports are that #Unbroken gives very short shrift to the faith side of Zamperini’s journey. When will Hollywood learn?” author Eric Metaxas tweeted on Wednesday (Dec. 3).

The film doesn’t ignore faith, but it includes no mention of Jesus or Graham. Faith is portrayed more generically — unlike the 2010 book by Hillenbrand (she also wrote the best-selling “Seabiscuit”), which was praised by Christian readers for capturing the drama of Zamperini’s conversion.

Zamperini died from pneumonia on July 2 at age 97. His son, Luke Zamperini, is helping promote the film.

Jolie’s role as director prompted questions about the film’s faith element; given Jolie’s own lack of faith, some reviewers questioned whether the actress would give short shrift to Zamperini’s faith.

“There doesn’t need to be a God for me,” Jolie said in 2000. “There’s something in people that’s spiritual, that’s godlike.” Her husband, actor Brad Pitt, has said he is “probably 20 percent atheist and 80 percent agnostic.”

At a press screening here, reporters were told Jolie would not answer questions related to her own faith, or lack thereof.

The film does include some generic portrayals of faith and God. Early in the film, Zamperini is scolded for not paying attention in church while the priest tells congregants to love their enemies. He watches as his mother prays, and asks his fellow crash survivor about his faith.

And he turns to faith in his most desperate moment. “If you get me through this, if you answer my prayers, I swear, I’ll dedicate my whole life to you,” Zamperini is shown praying during his 47 days at sea. “I’ll do whatever you want. Please.”

The sky breaks open and rain pours down, providing the survivors much-needed water in their rafts.

Faith is mostly absent from the rest of the film. “After years of severe post-traumatic stress, Louie made good on his promise to serve God, a decision he credited with saving his life,” one slide at the end of the film says. “Motivated by his faith, Louie came to see that the way forward was not revenge, but forgiveness.” 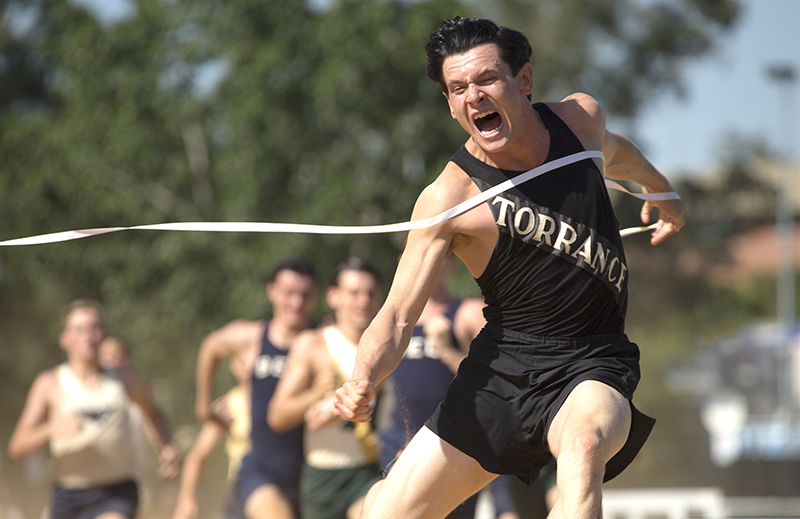 Christian media critic Ted Baehr has already blasted the film. “‘Unbroken’ is one of the best books ever written,” he said in a review posted at Christian Today. “The great story is that he got out of his anger problem (with PTSD) by coming to Christ.”

The film spends several scenes depicting the abuse Zamperini experienced at the hands of a Japanese soldier nicknamed “The Bird.” In the book, Hillenbrand writes that Zamperini forgives “The Bird” and tries (unsuccessfully) to reach out to him. The end of the film, however, says that Zamperini “made peace” with his captors.

“He returned to Japan, where he found and made peace with his former captors,” a slide at the end says. “Only the Bird refused to meet with him.”

For some, saying Zamperini “made peace” instead of “forgave” may not be enough.

“To me, the most amazing part of his story is not just surviving the incomprehensible beatings in the Japanese internment camp, or being adrift at sea for over 47 days,” California pastor Greg Laurie told The Christian Post. “It was the fact that Louie was able, because of his conversion and newfound Christian faith, to go back to Japan to the very guards who mistreated him and forgive them, as well as tell them about Jesus Christ.”

Forgiveness is a central theme in another popular Christian World War II epic, “The Hiding Place.” Dutch Christian Corrie Ten Boom was sent to a concentration camp for her role in hiding Jews from the Nazis. After her release, one of the camp guards approached her for forgiveness.

“I had never known God’s love so intensely as I did then,” she wrote in the book, which later became a film.

Not everyone expects “Unbroken” to include much on Zamperini’s faith, certainly not on the level of “The Hiding Place.” It would be difficult for a film to include the conversion narrative without feeling like it was tacked on at the end, said Patton Dodd, editor of OnFaith, who has read the book but not yet seen the movie.

“I can think of all sorts of good reasons a filmmaker would not know how to make sense of the faith content in that book, because it’s really very internal. There isn’t much action, even in the Billy Graham scenes (compared to the rest of the book), and Billy gets all the best lines,” Dodd said. “That makes for tough choices related to visual storytelling.”

A 137-minute film will never be able to include all the details included in a 400-page book — including the time when Zamperini shook Adolf Hitler’s hand during the 1936 Olympics in Berlin.

Zamperini’s conversion takes up the last 30 pages of the book; Jolie ends the film in the same way — even though many Christians would see it as where a person’s life begins. Either way, a story eventually has to end.

Perhaps Zamperini was simply grateful someone like Jolie would elevate his story and bring it to the main screen. Some reports suggest Universal Pictures held the movie rights to Zamperini’s life story for more than 50 years.

Before Zamperini’s death, Jolie showed him rough cuts of the film. From all accounts, he had no complaints.

I made a new friend — Angelina Jolie,” Zamperini said. “The gal really loves me. She hugs me and kisses me ’til I can’t complain.” 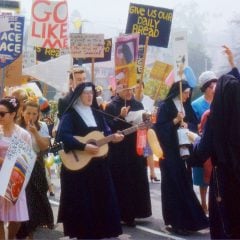