NEW YORK (RNS) Jordyn Garrett left home so he could become Olivia. Lerato “Lee” Mokobe left South Africa to pursue her dreams, but can’t return because of the dangers her home life and culture posed to her identity. Sarah Silva left her home because of sexual abuse and unhealthy family relationships.

They’re not even old enough to rent a car, and yet they’re living homeless in New York City. But these and other young adults found themselves a family in the Reciprocity Foundation.

The Reciprocity Foundation is a nonprofit dedicated to helping the city’s homeless youth realize their full potential by developing their passions and reconnecting with their spiritual side. Many of the youth they work with are people of color or part of the LGBT community, and many come from religious backgrounds. 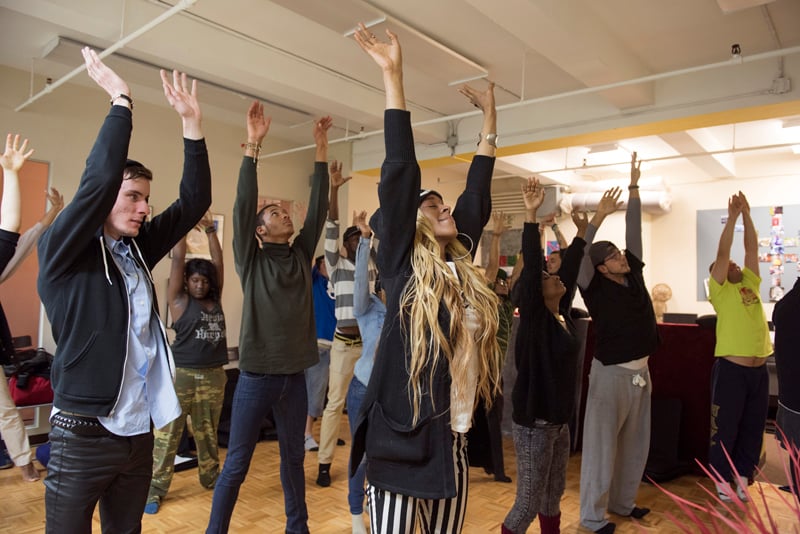 Youth participate in exercises during the Urban Retreat at the Reciprocity Foundation. Reciprocity leads a number of retreats where youth practice yoga and meditation, which aim to help restore an element of spirituality in the young adults it works with. Photo by Alex Fradkin

“Many (of these youth) feel negatively towards religion since it has contributed to their isolation from their family and/or homelessness,” said Taz Tagore, a Reciprocity co-founder.

Each year, Reciprocity leads a number of retreats where the “students” practice yoga and meditation, which Tagore explained aim to help restore an element of spirituality that is often broken or damaged.

“Youth are free to experience the retreats as secular or bring their faith backgrounds to (a retreat),” Tagore said. “Some say that retreats inspire them to pray again, or to be spiritual again.”

Tagore, a practicing Buddhist, founded Reciprocity in 2005 with Adam Bucko, a contemplative Christian. The goal of Reciprocity’s retreats is to open a “safe space” for the youth, she said. She noted that Reciprocity isn’t interested in forcing their youth to follow any religious dogma because of their negative experiences. Taz Tagore, one of Reciprocity’s founders, leads meditation during the Urban Retreat at the Reciprocity Foundation. Photo by Alex Fradkin

Strong religious rejection or denial of LGBT youth by their families can have serious consequences for these youth, according to Caitlin Ryan of the Family Acceptance Project. She has studied homelessness among LGBT youth and how families deal with their children’s sexual identities.

“We’ve linked various kinds of religious condemnation from families to substance abuse, suicide risk and other mental and health risks,” said Ryan, whose project is based at San Francisco State University.

According to Ryan’s research, LGBT youth from families that  rejected them are on average more than eight times more likely to commit suicide.

Ryan said that Reciprocity’s approach addresses a hole in many of these young lives.

“Most LGBT adults have left their childhood religion because of rejection they’ve experienced,” Ryan said. “So many have a lack of rootedness and connectedness. (Reciprocity’s) approach is helping to restore a sense of spiritual practice.”

In addition to five to eight mini “urban retreats” each year, Reciprocity offers three to four weekend retreats at a lodge in upstate New York. Throughout the weekend retreats, youth are involved not only in yoga and meditation, but also participate in Native American spiritual rituals and individual one-on-one spiritual counseling.

“Coming here, it’s like a free space — you don’t have to have your wall up,” said Garrett, the transgender woman who’s been with Reciprocity since January. Participants complete a writing exercise expressing hopes, dreams and fears during the Urban Retreat at the Reciprocity Foundation. Photo by Alex Fradkin

Garrett, 23, was raised in a devout home of Jehovah’s Witnesses. Born as just Jordyn, Garrett was in denial about her identity and said she left home to become the woman she knows herself to be.

Mokobe, 19, has only been with Reciprocity for two weeks. She came to the U.S. five months ago to work on a freelance video project. She’s won second place in an international youth slam poetry competition and had an interview with Julliard. But she ran out of money and has been staying at Covenant House, a homeless youth shelter in the city.

Mokobe, who identifies as queer and androgynous, said she couldn’t return home because of an abusive father and the threat her culture poses to her identity.

“My mother thought the best way to protect me,” Mokobe said, “was to make sure that I never come back.”

But both Garrett and Mokobe said they found a safe place in Reciprocity. For Mokobe, it’s a family away from home. For Garrett, it’s a place where she can be herself.

While Reciprocity partners with homeless youth shelters and centers throughout the city, it doesn’t focus on goals like helping youth find a place to live or a steady job. Instead, it is interested in something a little more intangible.

“Of course, our youth need to work and live, but we find that external solutions without inner awareness leads to small or unsustainable solutions for youth,” Tagore said. 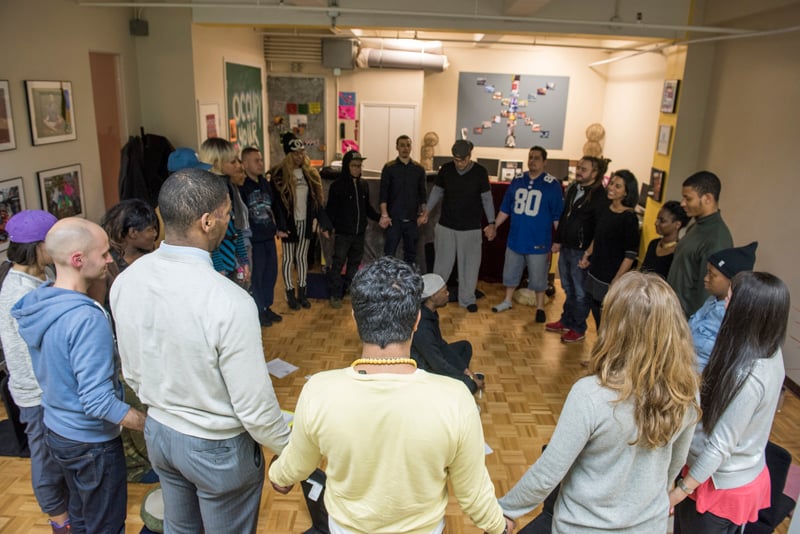 Participants hold hands during the closing ceremony at the end of the Urban Retreat at the Reciprocity Foundation. Photo by Alex Fradkin

Reciprocity doesn’t only focus on the spiritual, though. The foundation also works to get the youth involved with internships in media and the arts, as well as with artistic projects like photo essays and videos. It also helps the youth work on getting involved in higher education programs or provide counseling.

Maurice “Rees” Smith, 19, came to the city wanting to write. He had no clear idea what to write or how. “They helped me take what I wanted to do, which was abstract, and make a plan that I could work on in steps,” Smith said.

Silva, 18, said that going to Reciprocity programs helps her relax and shake loose the baggage from an unstable family. “I find that I’m more calm and a little less high-strung,” she said.

Other students have used Reciprocity as a stepping stone to successful careers. Some have gone on to help produce documentaries, lead HIV awareness campaigns, start careers in modeling and more. Isis King, the first transgender contestant on “America’s Next Top Model,” was a student with Reciprocity.

Despite their struggles, the students cling to a future they now only can imagine. Silva plans to attend culinary school and open her own bakery. Mokobe wants to return to South Africa and open a performing arts school for LGBT youth.

“When you see a young person change so that they’re no longer going to be stuck in a place of poverty and disempowerment and isolation,” Tagore said, “you know they have their whole lives ahead of them.”