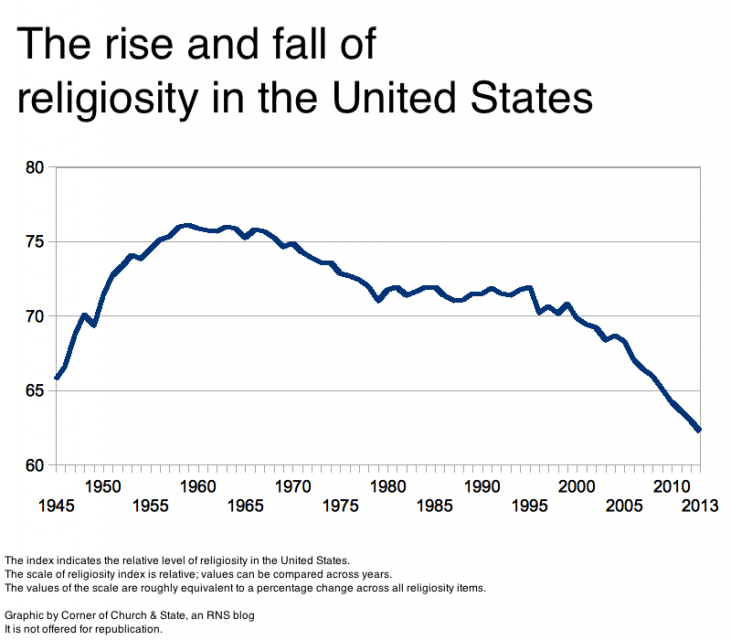 It’s common for people to believe that religion was always more vibrant in the past. Earlier generations were always more religious than we are, right? Not always.

Religiosity can rise and fall just like other things do over time. In fact, America of the 1940s was about as as religious as America today.

Coming out of World War II, America was not very religious. The war had put a halt on many of the things that increase religiosity, particularly marriage and procreation. Churches, just like other organizations, were slowed by drain on resources and volunteers during the war. The post-war years turned this around. The economy improved. The baby boom ensued. And religion grew.

The 1950s were also a time when America began to see itself as a Christian nation in a cold war with atheistic communism. President Eisenhower joined a church after being elected, becoming the first president to be baptized while in office. In 1954, the phrase “under God” was added to the pledge of allegiance to signify the religious stance of the country.

The rise of religion was clearly evident to those living in the midst of it. Magazines including Life and McCall’s featured issues on religion and the so-called religious revival. Some even labeled it the “Third Great Awakening.” Sociologists noted the rise in religiosity, writing about it in aptly named titles such as There is a Religious Revival!, The Surge of Piety, and The New Shape of American Religion. In 1956, National Council of Churches (NCC) published a forum on the question with a who’s-who of 1950s religion and culture including

It seemed obvious to these and other commentators that the country was in the midst of a religious revival. The only issue for debate was its duration and future.

That is, until recently.

Over the past fifteen years religion has once again declined. But this decline is much sharper than the decline of 1960s and 1970s. Church attendance and prayer is less frequent. The number of people with no religion is growing. Fewer people say that religion is an important part of their lives. But the decline in religiosity was not as sharp as its 1950s rise.

The Great Decline may be a recent change, but our current level of religiosity isn’t new. In 2005, the level of religiosity was about the same as it was in 1945. We have since continued to see lower and lower levels of religiosity, but we’re not that much less religious than we were eight decades ago. The rise of religion in the 1950s has skewed our perception of the past — things have changed but not in a straight decline.

What next? There is nothing inherently cyclical about the change in religiosity; what goes down does not always go up again. The 1950s had some unique events that helped spur religiosity. The long-run trend should be toward less and less religiosity (because of increased wealth). That said, there’s no reason that we cannot see another up-tick in religiosity in the future.

How do we track changes in American religiosity? We start with information from rigorous, scientific surveys on worship service attendance, membership in congregations, prayer, and feelings toward religion. We then use a computer algorithm to track over hundreds survey results over the past eight decades. The result is one measure that charts changes to religiosity through the years.

Because the index is a combination of different measures with different scales, the index produced by the algorithm does not have a specific scale. The numbers in the graph are roughly analogous to percentages but not exactly the same. The index’s numbers are like degrees Fahrenheit and Celsius, which are arbitrary marks on a thermometer that show the difference between heat levels but not absolute levels of heat show by Kelvins. You can see all the details of how this index is measured here.

Portions of this post were originally included in two previous posts on religiosity from 1952 through 2013 (here and here).  For more on the most recent decline in religion, you can see details on five recent Gallup surveys here.