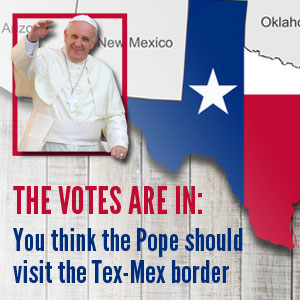 RNS asked readers to vote where they'd like to see the pope visit. Percentages add up to more than 100 because people could choose more than one city. Religion News service photo of poll results

(RNS) Everyone wants a spot on Pope Francis’ itinerary when he comes to the United States in September 2015.

After all, he's a global rock star of religion. A new Pew Research Center survey released Thursday (Dec. 11) shows 78 percent of Americans give the pontiff a favorable rating.

All we know for sure is that he’ll go to Philadelphia for the World Meeting of Families. But why cross the Atlantic for just one stop?

So, RNS asked readers in an unscientific poll which other U.S. cities or areas he should visit.

The U.S.-Mexico border led the voting by miles, perhaps because Francis has paid urgent attention to the plight of immigrants and refugees. He also paid an emotional visit to the separation wall between Israel and Palestine earlier this year; those iconic photos encapsulated Francis' calls for reconciliation and an end to divisions.

Readers gave 146 of the nearly 700 votes cast (readers could vote for more than one city) to the border. Is an invitation in the mail already? We tried reaching the bishop of Brownsville, Texas, Daniel Flores, for comment but no reply yet.

Detroit’s not shy. Schoolchildren have already sent their handwritten pleas to the Vatican, although Motor City did not drive to the front of the survey. At 101 votes, Detroit was essentially tied with Chicago's 102 votes. Maybe the Windy City gets an edge because the pontiff did just name the city’s new archbishop, Blase Cupich.

Or he might want to hang with Cardinal Donald Wuerl in Washington, D.C., and take up Congress' invitation to address a joint session of the House and Senate.

Boston edged out San Francisco and New York, although Cardinal Timothy Dolan, archbishop of New York, reportedly has "a hunch" his city is a contender. Francis has an open invitation to address the United Nations.

Atlanta and Hollywood were also-rans in the RNS poll.

Actually, write-in comments gave more votes to Ferguson, Mo., a place sorely in need of a voice of peace, than to Hollywood.

Comments also included hometown callouts for Baltimore; Pensacola, Fla.; St. Louis; Phoenix; Salt Lake City; and some unmentionable directions from folks who don’t like this -- or any -- Catholic pope.