(RNS) You may know the basic props of Hanukkah: a menorah, a dreidel and chocolate coins. But here’s the inside story on Hanukkah, which begins Tuesday at sundown (Dec. 16). 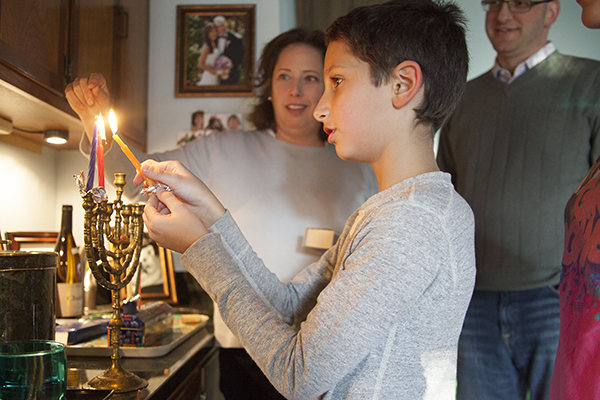 Quentin Wise lights a candle on the menorah for the second night of Hanukkah with his family in Leawood, Kan., on Nov. 28, 2013. RNS photo by Sally Morrow

Q: Isn’t this a no-big-deal Jewish holiday that’s pumped up just because it falls so close to Christmas?

Hanukkah is considered a minor Jewish holiday, and the story it commemorates — the ancient and outnumbered Maccabees who triumphed over their Hellenistic oppressors to preserve their faith — is not based in the Torah, the Hebrew Bible.

And there’s no denying that Hanukkah is a bigger deal in majority Christian nations because it’s celebrated near — and sometimes on — Christmas. With all the Christmas hoopla, it’s not surprising that Jews have turned Hanukkah into a grander celebration than it might have been otherwise.

But Hanukkah is still important, and underscores one of the most significant themes in Jewish history: the struggle to practice Judaism when powerful forces seek to extinguish it.

Q: Why does the miracle of Hanukkah lead Jews to eat jelly donuts?

It’s all about the oil. When the pious Maccabees reclaimed the Temple in Jerusalem, around 165 B.C. , they found only enough unadulterated oil to light the temple’s candelabra, or menorah, for one day. But miraculously, according to the Talmud, a body of rabbinic teaching, the oil lasted for eight days.

To celebrate Hanukkah, aka the Festival of Lights, Jews light a candle on the first night of Hanukkah, two on the second, and one more on each successive night of the eight-night holiday.  Gastronomically, Hanukkah focuses on foods cooked in oil, most typically latkes (potato pancakes fried in oil) and jelly donuts.

Q: Hanukkah? Chanukkah, Hanukka. How come there are a million different ways to spell Hanukkah?

Variations abound mostly because of the eighth letter of the Hebrew alphabet, the “chet,” with which the word “Hanukkah” begins in Hebrew. “Chet” doesn’t have an equivalent in English. And the double K’s? In classical Hebrew, there’s a dot in the middle of the Hebrew letter “kaf,” which indicates an especially robust “k” sound.

Q: OK, now that I know how to spell it, what does it mean?

Hanukkah means “dedication” in Hebrew, in that the Temple, which had been turned into a pagan shrine, was rededicated to God.

Q: Do Jewish children get presents on all eight nights of Hanukkah?

Ah, the Jewish parents’ dilemma: They want their kids to appreciate Hanukkah, and not be jealous of friends who will be visited by Santa; but they don’t want children to equate Hanukkah only with presents. A common practice is to give a biggish present on the last night, and small to medium presents on other nights, taking breaks with no-present nights.

Q: What’s with the spinning top? Tori Avey, the Los Angeles-based writer behind The Shiksa in the Kitchen blog, poses with a dreidel. RNS photo courtesy Tori Avey

It’s called a dreidel (from the Yiddish, the language of many European Jews) and it’s practically the official game of Hanukkah. The dreidel (pronounced “DRAY-del”) has four sides, each with a Hebrew letter that stands for the saying “a great miracle happened there” — “there” being Jerusalem. If you’re in Israel, the letters stand for “a great miracle happened here.” Depending on which letter the dreidel lands on, you get a certain amount of chocolate coins, paper clips, raisins . . . whatever you are playing for.

Q: How come there are no good Hanukkah songs?

There are. You’re just not going to hear them on the radio in the U.S. because Jews are less than 2 percent of the U.S. population and there isn’t a big market for these tunes. Plus, some of the best Hanukkah songs are in other languages spoken by Jews. But if you’re looking for a catchy Hanukkah song in English, try the Maccabeats’ “Miracle” or Peter, Paul and Mary’s “Light One Candle,” which is a famous folk song that many people don’t know is actually about Hanukkah.