Happy Hanukkah week. Here are 10-ish items from the weekend:

An armed terrorist is holding an unknown number of hostages in a Lindt cafe in Australia while displaying a black flag with the Shahada, or Islamic declaration of faith, written on it. The situation threw off a scheduled meeting between federal police and Muslim leaders (subscription required). 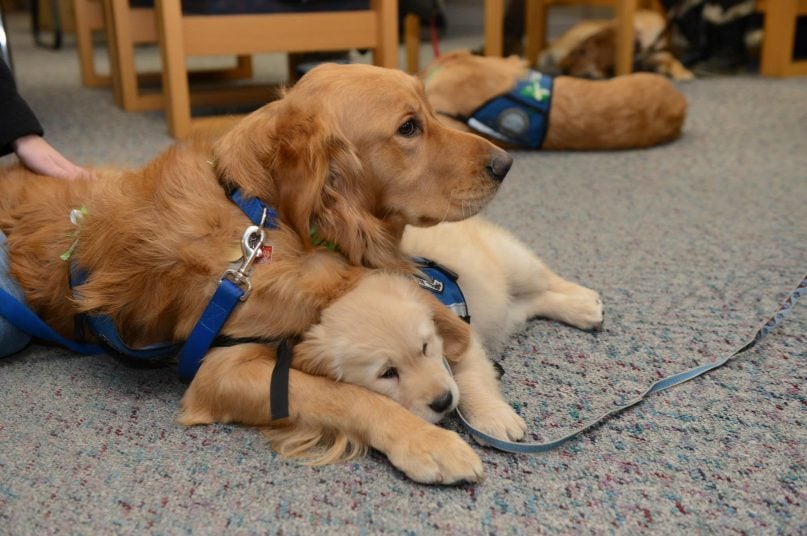 Just so we’re 100 percent clear: Pope Francis did not say that all dogs go to heaven. David Gibson clears things up. Somewhat unrelated, but the photo to your right is of comfort dogs from the Newtown shooting, which marked its two-year anniversary yesterday.

In other Pope Francis news, the pontiff sent prisoners of Sing Sing a portrait of himself in response to an inmate drawing sent by one of the inmates. Plus, watch out for a report on nuns tomorrow.

Congregants in black churches across the country wore black to Sunday services and prayed over the men in attendance in protest of police shootings.

Franklin Graham, son of evangelist Billy Graham and president of Samaritan’s Purse finds agreement with Amos Brown, pastor of San Francisco’s Third Baptist Church and a national board member of the NAACP, on issues surrounding Ferguson.

Celibate gay Christians are seeking acceptance from both churches and gay communities.

A pharaoh’s statue has been restored 3,200 years after it collapsed in an earthquake.

Remember KONY 2012, the viral video about child solders in Africa? Though the group’s founder has tried to make a comeback, the organization behind the video is closing.

Finally, here’s SNL’s weekend skit on what to expect when you go to Mass for Christmas.