NEW YORK (RNS) The subject is same-sex marriage, but the vivacious blonde who has come to personify the issue stops her interrogator with a scolding.

“Could I suggest that you don’t say same-sex marriage anymore?” Edie Windsor asks politely. “Because it’s not. It’s marriage.” 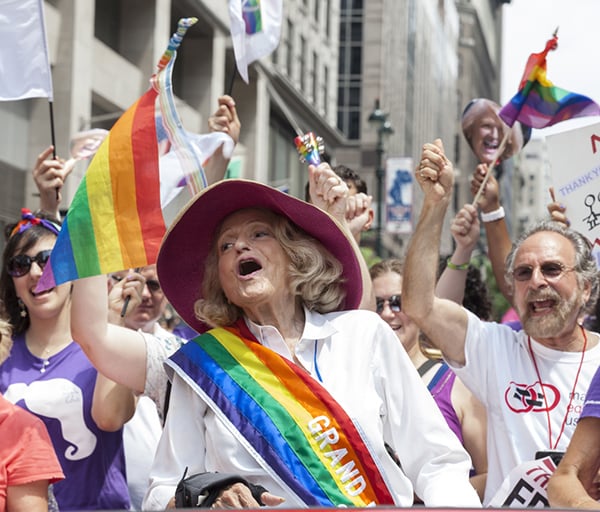 As in her own marriage to the late psychologist Thea Spyer, which followed a 40-year engagement. As in the wedding ceremonies she attends or is forced to skip because she can’t keep up with all the invitations. As in the marriages sanctioned by judges in 27 states this year, all of which mention Windsor by name.

While 2013 brought the landmark ruling in United States v. Windsor that forced the federal government to recognize legally married gay men and lesbians, 2014 was the year that the case spurred a judicial juggernaut. From Oklahoma in January to Mississippi in December, federal judges in the nation’s most conservative states declared that what this 85-year-old widow started can’t be stopped.

From the comfort of her apartment at the foot of Fifth Avenue in Greenwich Village, Windsor recalls the “mind-blowing days” when state laws and constitutional amendments banning gay marriage were falling like so many dominoes.

“The statistics were changing every night,” she says. Even now, Windsor has trouble with the math — 35 states where marriage is legal for two men or two women, and 10 others where lower court judges have said it should be.

“I didn’t expect any of it,” she says, “and certainly not in the time frame.”

To be sure, several recent decisions upholding gay marriage bans in Michigan, Ohio, Kentucky, Tennessee, Louisiana and Puerto Rico have slowed progress and put the ultimate resolution in doubt. The Supreme Court that brought Windsor instant fame on June 26, 2013, will have to make the final call — perhaps next year.

But the court may have tipped its hand in October when it refused to hear appeals from Utah, Oklahoma, Virginia, Indiana and Wisconsin challenging lower court rulings that struck down gay marriage bans. Now most Americans live in states where such marriages are legal.

Windsor, a former IBM computer systems programmer, isn’t discouraged by the setbacks. She never expected the fight she began in 2009 to be easy.

When Windsor and her lawyer, Roberta Kaplan, filed the lawsuit that would change the arc of history, only a handful of states allowed gays and lesbians to marry. By the time they won their case, there were a dozen. After Windsor came the deluge.

All that happened because Windsor balked at a $363,000 federal tax bill on Spyer’s estate in 2009 — a tax that would not have been levied on the surviving spouse in a heterosexual marriage.

“The principal purpose and the necessary effect of this law are to demean those persons who are in a lawful same-sex marriage,” Justice Anthony Kennedy wrote in the 5-4 decision.

Windsor has seen not only judicial victory in her lifetime, but steady progress in public opinion polls. About 55 percent of Americans now say gay marriage should be legal.

“For ages before my case, that was not true,” she says. She hopes those sentiments will turn the tide against what she calls “terrible and ugly” state proposals aimed at shielding merchants with religious objections from participating in same-sex marriages.

Windsor takes pride in the advances made by her gay and lesbian community.

Five years removed from the heartache of Spyer’s death, Edie Windsor is a whirlwind. She recalls the days when she begged her cardiologist to keep her alive long enough for the Supreme Court’s ruling in her case. Now she’s walking 10,000 brisk steps a day, and her heart function is improving.

Her schedule is filled out for the first six months of 2015 already, public appearances wedged between her sign language classes (she is hard of hearing) and chorus practice (Spyer encouraged her to sing). Riding the Broadway-Seventh Avenue Local subway, she revels in a brief dose of anonymity.

“What I am is a draw,” Windsor says. “Every organization that is having something wants me there because they double the number of people there.”

How long will she be able to keep up the pace? Windsor says it doesn’t matter — the final victories in the gay marriage movement will happen, with or without her. 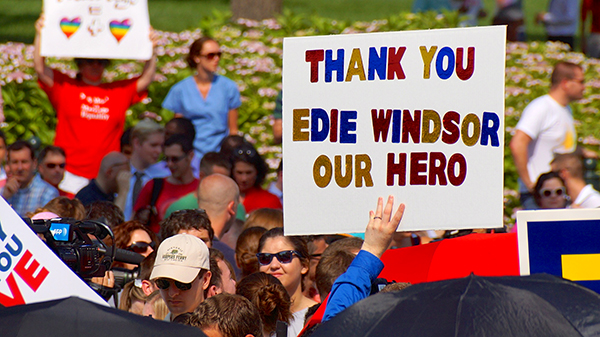 A same-sex marriage supporter pays tribute to Edie Windsor’s contributions after the Supreme Court’s decision on the Defense of Marriage Act in 2013.