(RNS) TLC prides itself on showcasing how people live, offering a look into a world we may not often see. The cable network has brought us “19 Kids & Counting,” “The Little Couple” and “Sister Wives.”

On Sunday (Jan. 11), TLC plans to air “My Husband’s Not Gay,” a one-hour special about four Mormon men who are married to women but attracted to men. They refer to it as SSA, same-sex attraction. In the special, the four couples explore talk about their lifestyle decisions.

It’s causing controversy before it has even aired. 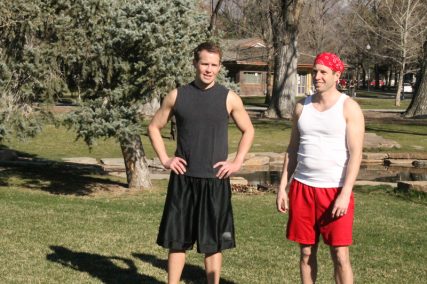 Prett and Jeff courtside during a scene from TLC’s new show “My Husband’s Not Gay.” Photo courtesy of TLC

A petition started by Josh Sanders on Change.org says the show “promotes the false and dangerous idea that gay people can and should choose to be straight in order to be part of their faith communities.”

Sanders describes himself as a devout Christian who was told as he was growing up that he should “pray the gay away.” In the end, he says, that only caused despair.

Sarah Kate Ellis, president and CEO of GLAAD, echoes his sentiment, saying in a statement on the group’s site, “This show is downright irresponsible. No one can change who they love, and, more importantly, no one should have to. By investing in this dangerous programming, TLC is putting countless young LGBT people in harm’s way.”

TLC has responded to the objections, saying in a statement, “The individuals featured in this one-hour special reveal the decisions they have made, and speak only for themselves.”

Faith
The SBC’s same-sex abuse problem
News
Namibian Christians vest hopes in ‘pray the gay away’ tactic
News
Henri Nouwen’s intimate letters shed light on his ‘theology of the heart’
Beliefs
Conversion therapies don’t work, experts say, so why do gay Mormons still seek them out?
Beliefs
TLC dumps Duggars’ ’19 Kids’ show for good
© Copyright 2020, Religion News Service. All rights reserved. Use of and/or registration on any portion of this site constitutes acceptance of our User Agreement and Privacy Policy, Privacy Statement and Cookie Notice. The material on this site may not be reproduced, distributed, transmitted, cached or otherwise used, except with the prior written permission of Religion News Service.