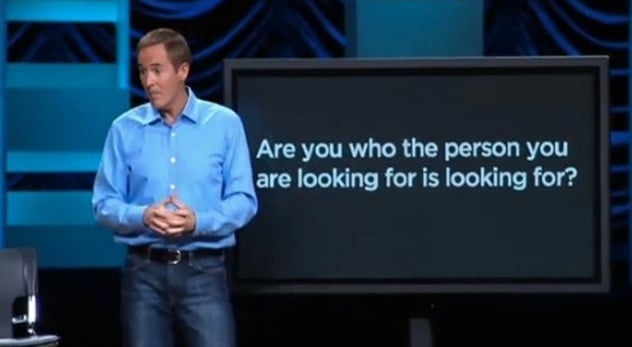 The mega-church pastor hits a handful of hot topics head on. He even explains why he avoided discussing homosexuality but chose to talk about “bitches” and “hos.” – Photo courtesy: Andy exualltanley

The pastor of one America’s largest churches is peeling back the covers on topics that might make some Christians squirm. Andy Stanley, pastor of the 30,000+ member North Point Ministries, addresses a range of issues from human sexuality to pornography in his latest book, The New Rules for Love, Sex, and Dating. While the broader culture continues to fight over what “sexual morality” means, one thing is certain: Andy Stanley is determined not to sit this one out.

RNS: If these are the new rules for love, sex, and dating, what are some of the old rules that you don’t think work anymore?

AS: I don’t know that they are rules so much as assumptions. One of the big assumptions I challenge is: As long as I’m in love and the chemistry is right, then everything is going to turn out right. The average person would hear that and say, “That’s not true.” But that is the approach most people take to romantic relationships. The new rule is: don’t assume that just because you feel right, everything is going to be alright. We have to become the type of person that the person we’re looking for is looking for.

In every other arena of life, we prepare. But somehow when it comes to love and romance, there is an assumption that we don’t need to prepare, but just commit ourselves. That somehow commitment will trump the needs for preparation. This is more about getting ourselves ready for the time when we meet someone that there’s chemistry with and we’re falling in love with, we’ll actually be prepared to keep the commitment we’re making.

This is not simply a book for people who want to get married; it is for anyone who wants to have successful, long term relationships. I hope the primary takeaway of these teachings is that: [tweetable]people should focus on becoming someone instead of finding someone.[/tweetable]

RNS: How can a history of sexual abuse impact the way these rules function in your life?

AS: Sex is not just physical even though that is the way the culture and media often treat it. When a woman is raped or a child is sexually abused, they don’t just shake it off and go on as if they were merely mugged. Our sexuality goes way beyond what is physical, and we see that especially in the realm of sexual abuse.

RNS: Word on the street is that your church is becoming “gay-friendly,” whatever that means. Knowing you as well as I do, it struck me as odd that you would write an entire book on the subject without addressing the LGBT community. Was that an oversight or on purpose?

AS: That’s a great question, and I’m glad you asked. When I taught this content to our churches, I met with about 13 of our attenders who are apart of the LGBT community. I met with them to ask lots of questions, including their response to the series because I did not address the LGBT community directly. It was unanimous that they thought it was helpful and shared some of the stuff they learned.

But I asked them if they wished I would have addressed them specifically since all of my illustrations and teaching assumed heterosexual relationships. These men and women unanimously said “no.” They said that in the LGBT community, when they attend church, they are accustomed to contextualizing all the relationship teaching anyway.

RNS: Is it true that when you taught this content to your church, you talked about “bitches” and “hos” on Mother’s Day. Did people get up and leave?

As: I did. I told the men in our churches that if they have songs on their playlist that refer to women as “bitches” or “hos,” they needed go home and clean out their playlist. I received one complaint via email from a guy visiting who felt like I was picking on a particular “culture.” I emailed him back and told him a culture comfortable referring to women as bitches and hos is a culture that views women as a commodity. A culture that views people as a commodity is a culture sliding towards softening their position on slavery. But I didn’t see anyone leave. In one service, people clapped.
RNS: How do these teachings look different now than if you had written them 20 years ago?

RNS: You say that “love is unnatural.” A lot of people would say love is inherent to who we are as humans and one of the most natural things we can feel or express or do. What do you mean by that phrase?