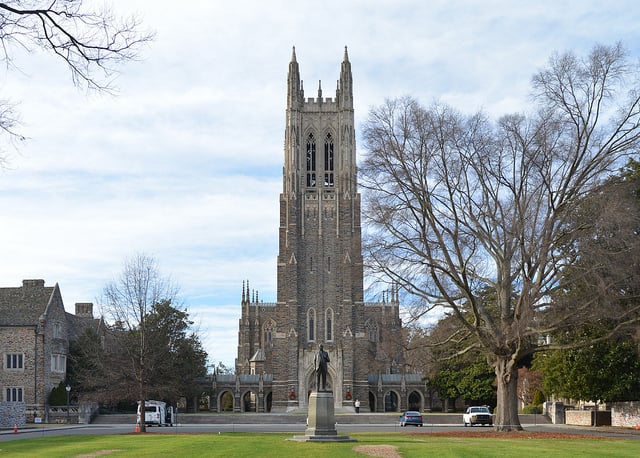 The decision on Thursday (Jan. 15) came one day before the “adhan,” or traditional call to prayer, was to be broadcast from the heart of campus in Durham, N.C.

Michael Schoenfeld, a Duke vice president for public affairs and government relations, said in a statement the school remains committed to “fostering an inclusive, tolerant and welcoming campus” for all students but “it was clear that what was conceived as an effort to unify was not having the intended effect.”

Graham, who leads his father’s Billy Graham Evangelistic Association from the other end of the state, in Charlotte, said the call to prayer includes the words “Allahu Akbar,” or “God is great,” which was shouted by Islamist militants during last week’s deadly attacks across Paris.

“As Christianity is being excluded from the public square and followers of Islam are raping, butchering, and beheading Christians, Jews, and anyone who doesn’t submit to their Sharia Islamic law, Duke is promoting this in the name of religious pluralism,” he said on his Facebook page.

Graham urged alumni to withhold donations until the call to prayer was suspended, and the #boycottDuke hashtag spread on Twitter. On Friday, Graham called the change “the right decision.” 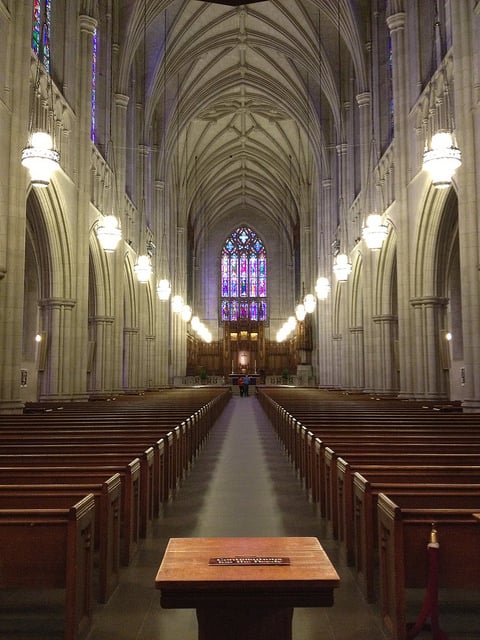 Duke Chapel is a nondenominational Christian church that hosts Catholic and Protestant worship services, as well as Friday prayers for Muslim students. Photo by uneek78/Flicr.

Duke was founded by Methodists but is now largely secular. The Duke Chapel at the center of campus bills itself as a “Christian church of uniquely interdenominational character and purpose.”

Omid Safi, director of the Duke Islamic Studies Center, said in an email that he was deeply disappointed. About 700 of the university’s more than 14,000 students are Muslim.

“What could have been a celebration of Duke’s commitment to our robust and diverse religious community has had to be adjusted due to the bigotry of Franklin Graham (a noted Islam-hater since 2001) and anonymous people leaving threatening and violent messages for members of the Duke community.

“I know that there are many inside of the Duke community and beyond who want to see us be better, be a loving and welcoming community in which all of us bring our religious particularity to the public arena. I look forward to that beloved religious community at Duke, in America, and in the world community.”

“The call to prayer will be given. It just won’t be amplified from the Chapel top,” he wrote.

Khalilah Sabra, executive director of the Muslim American Society Immigrant Justice Center, and a member of the Raleigh-Durham Muslim community, said the reversal was the result of Graham pulling “his ranks together.”

Sabra cited Graham’s outspoken criticisms of Islam. After the 9/11 terrorist attacks, he called Islam a “very evil and wicked religion” and last year called Islam “a false religion.” In 2010, he apologized after questioning President Obama’s Christian faith, saying he was “born a Muslim … and the Islamic world sees the president as one of theirs.”

“Basically for years, since 9/11 he has waged a campaign against Islam, against the rights of Muslims,” said Sabra. “He has said basically they’re going to hell. He never misses an opportunity to suppress the dialogue of Muslims in North Carolina.”

Sabra said Duke’s Friday prayers were supposed to be followed by an open discussion to talk about the pros and cons of having the adhan amplified from the bell tower. She said it would have been an event that gave Muslim students a chance to feel like they belonged.

“The majority of students were kindergartners when 9/11 happened. They were reared in a hostile environment, full of Islamophobia and bigotry. This was a way to get them feeling included and connected, to get them to connect with the American college environment, and the whole thing went up in smoke.”