WASHINGTON (RNS) The U.S. Supreme Court agreed Friday (Jan. 16) to resolve the national debate over same-sex marriage once and for all.

The justices agreed to consider four cases from Michigan, Ohio, Kentucky and Tennessee. They will be consolidated and heard together.

That sets up a schedule under which the court likely will hear oral arguments in April and issue a ruling before its current term ends in late June.

The justices’ hands were forced by a split among federal appellate courts after the U.S. 6th Circuit Court of Appeals upheld marriage bans in those four states last November. While gays and lesbians can marry in 36 states, most recently including Florida, the practice is banned in those four states, along with 10 others.

The court had sidestepped the issue in October, when it let stand appeals court rulings striking down gay marriage bans in Virginia, Indiana, Wisconsin, Oklahoma and Utah. Those rulings and a later appeals court decision affecting Idaho and Nevada drew in neighboring states as well. As a result, more than 70 percent of Americans live in states where gay marriages are legal, and thousands of couples have tied the knot.

The high court’s long-awaited decision to intervene pleases both sides in the debate. National gay-rights groups have been pressing for a 50-state solution. The National Organization for Marriage, which opposes gay and lesbian unions, also wanted the court to step in.

The new challenge is destined to become even more of a landmark case than those decided by the court in 2013 — United States v. Windsor, which forced the federal government to recognize gay marriages, and Hollingsworth v. Perry, which made California the 13th state to allow them.

Those rulings, while historic, did not resolve the threshold questions in the debate: whether gays and lesbians have a constitutional right to marry, or whether states have the right to ban the practice.

Since the gay marriage movement gained steam in the 1990s from Hawaii to Vermont, 30 states have passed constitutional bans. Eleven states and the District of Columbia legalized same-sex marriage by legislative action or voter initiatives. In 33 more states, judges have made the same call, though some of those decisions were delayed or overruled.

Most of the progress by gay-rights groups has come in the last two years: The number of states where gays and lesbians can marry has nearly doubled since October alone, and tripled since the court’s 2013 rulings. 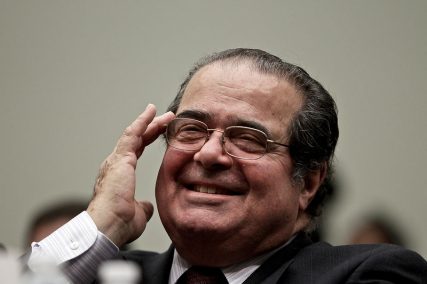 Justice Scalia’s dissent in the court’s 2013 gay marriage rulings set the stage for the overturning of bans on same-sex marriage in dozens of states.

The justices appear as split today as they were then, when Justice Anthony Kennedy wrote the 5-4 decision striking down a key part of the federal Defense of Marriage Act. In dissent, Justice Antonin Scalia seethed that it would lead to exactly what has happened since — a flurry of court rulings using the high court’s equal protection reasoning to strike down state bans.

But while divided, the justices have made a series of procedural moves that allowed same-sex marriage to proliferate, particularly by refusing to hear five states’ appeals in October. They even refused to halt gay and lesbian marriages in Idaho while the state challenges the verdict of the 9th Circuit Court of Appeals — something they had done last year in Utah and Virginia.

The swing vote remains Kennedy, who has authored the last three major rulings advancing the cause of gay rights. On one hand, he has defended voter-approved constitutional amendments, most recently in a Michigan case last year that upheld the state’s ban against racial preferences in university admissions. But he struck down the federal same-sex marriage ban as an affront to the constitutional rights of gays and lesbians.

Since then, dozens of federal and state court judges have toppled marriage bans for the same reason the Supreme Court ruled against DOMA, mostly citing gay and lesbian couples’ right to equal protection or due process under the Constitution. Since September, however, three federal courts have gone the other way — in Louisiana, Puerto Rico and the four-state 6th Circuit.

Circuit Judge Jeffrey Sutton, once considered a potential Supreme Court nominee for a Republican president, issued that 42-page appellate decision, with fellow GOP nominee Deborah Cook concurring. He said lower court judges’ hands are tied by a one-sentence Supreme Court ruling in 1972 that “upheld the right of the people of a state to define marriage as they see it.”

In response, couples in all four states asked the Supreme Court to hear their appeals. State officials in Michigan, Ohio and Kentucky, though victorious, agreed that the justices should weigh in. Gay couples and state officials in Louisiana sought to have their case considered before the 5th Circuit Court of Appeals rules, but the justices denied that request.