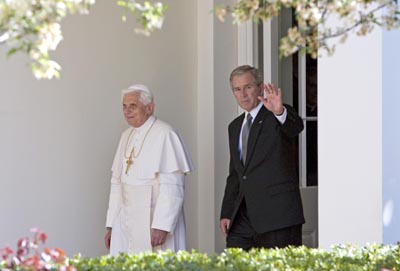 (RNS) Did you catch the shoutout to Pope Francis during President Obama's State of the Union address? It's only the third time in history that's happened.

Francis' name will resurface in Congress later this year if and when he accepts an invitation to address lawmakers -- that would be a historical first -- during his September trip to Philadelphia, Washington and New York.

“We might say, really, the highlight of the Washington visit might be his speech to the joint meeting of Congress, to the Senate and the House of Representatives," said Archbishop Bernardito Auza, a member of the papal visit planning committee.

However, such a speech will be far more than a “highlight.” With a Catholic vice president and a Catholic speaker of the House looking on behind him, the speech will serve as a vivid reminder of how far Americans have come in overcoming deeply embedded anti-Catholic prejudice and bigotry.

That bigotry includes Thomas Jefferson, who wrote in 1813: “History, I believe, furnishes no example of a priest-ridden people maintaining a free civil government. … In every country and in every age, the priest has been hostile to liberty.”

Indeed, during much of the 19th century, Catholics were accused by nativist Americans -- who were overwhelmingly Protestants -- of undermining the American experiment in democracy. Sometimes those accusations were accompanied by violence.

In 1834, a convent in Charlestown, Mass., was torched. In 1844, a riot in Philadelphia resulted in the deaths of 13 people and the destruction of two church buildings. In the same decade, the American Protestant Association was formed to denounce the “principles of popery” because they were considered “subversive of civil and religious liberty.”

In 1835, Lyman Beecher, a prominent Presbyterian preacher and a seminary president, advocated the exclusion of Catholics from any Western settlements as Americans moved in increasing numbers beyond the Eastern Seaboard. Ironically, his daughter, Harriet Beecher Stowe, was the author of “Uncle Tom’s Cabin,” a novel that drew attention to the evil of slavery in the U.S.

President Ulysses S. Grant publicly worried about a nation with “patriotism and intelligence on one side and superstition, ambition and greed on the other.” The Civil War hero also wanted public schools to be “unmixed with atheistic, pagan or sectarian teaching,” a not-so-subtle negative reference to Roman Catholicism.

In 1928, New York Gov. Al Smith was the first Catholic to run for the White House. During that campaign, there was a tide of anti-Catholic bigotry. There were fears Smith would take direct orders from the pope in Rome. Some bigots spread the rumor the pontiff was planning to move into the White House if Smith became president; Smith lost to Herbert Hoover in a landslide.

Even as late as 1960, some prominent Protestant ministers who feared a Catholic president campaigned against John F. Kennedy. The pastors, including the late Norman Vincent Peale, the author of the best-selling “The Power of Positive Thinking,” were fearful that JFK’s Catholic faith would collide with his constitutional responsibilities.

In a speech to a group of Protestant leaders in Houston, Kennedy famously rebutted such charges by asserting his personal and political independence from the Roman Catholic Church in matters of public policy. He narrowly won the election and still remains the only Catholic to reside in the White House.

Interestingly, Kennedy had only one papal meeting. When he met Paul VI in Rome in 1963, JFK was careful to only shake hands with the pope rather than kiss the pontiff’s ring, the usual etiquette for a Catholic. 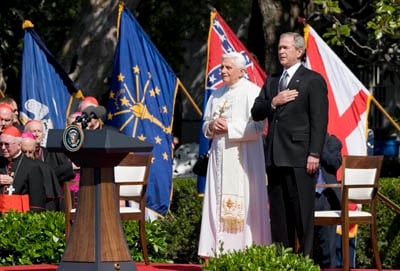 During the past 50 years there have been many more meetings between U.S. presidents and popes, but only two pontiffs have actually set foot in the White House. In 1979, the Southern Baptist Jimmy Carter welcomed John Paul II; in 2008, George W. Bush, a born-again evangelical, greeted Benedict XVI on the South Lawn.

Although John Paul and Benedict did not choose to do so, they could have easily unpacked their overnight luggage and stayed in the Lincoln Bedroom as honored guests -- something that would have been inconceivable in the days of Jefferson and Grant.

When Francis addresses Congress, it will be another tangible sign that “the times, they are a changin’.” And for that, we can all be grateful.