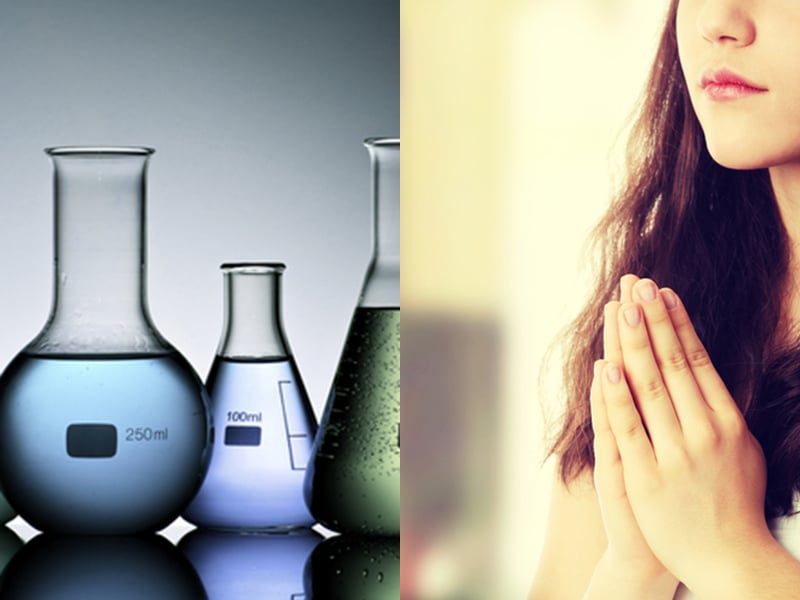 (RNS) Meet the “Post-Seculars” — the one in five Americans who seem to have gone  unnoticed before in endless rounds of debates pitting science vs. religion.

They’re more strongly religious than most “Traditionals” (43 percent of Americans), and more scientifically knowledgeable than “Moderns” (36 percent) who stand on science alone, according to two sociologists’ findings in a new study.

“We were surprised to find this pretty big group (21 percent) who are pretty knowledgeable and appreciative about science and technology but who are also very religious and who reject certain scientific theories,” said Timothy O’Brien, co-author of the research study, released Thursday (Jan. 29) in the American Sociological Review.

Put another way, there’s a sizable chunk of Americans out there who are both religious and scientifically minded but who break with both packs when faith and science collide.

Post-Seculars pick and choose among science and religion views to create their own “personally compelling way of understanding the world,” said O’Brien, assistant professor at the University of Evansville in Indiana.

O’Brien and co-author Shiri Noy, an assistant professor of sociology at the University of Wyoming, examined responses from 2,901 people to 18 questions on knowledge of and attitudes toward science and four religion-related questions in the General Social Surveys conducted in 2006, 2008 and 2010.

Many findings fit the usual way the science-religion divide is viewed:

— Moderns, who stand on reason, scored high on scientific knowledge and scored lowest on religion questions regarding biblical authority and the strength of their religious ties.

— Traditionals, who lean toward religion, scored lower on science facts and were least likely to agree that “the benefits of scientific research outweigh the harmful results.”

However, the data turned up a third perspective — people who defied the familiar breakdown. The authors dubbed them “Post-Secular” to jump past a popular theory that Americans are moving way from religion to become more secular, O’Brien said.

Post-Seculars — about half of whom identify as conservative Protestants — know facts such as how lasers work, what antibiotics do and the way genetics affects inherited illnesses.

But when it comes to three main areas where science and Christian-centric religious views conflict — on human evolution, the Big Bang origin of the universe and the age of the Earth — Post-Seculars break away from the pack with significantly different views from Traditionals and Moderns.

Areas where the factions are clear: 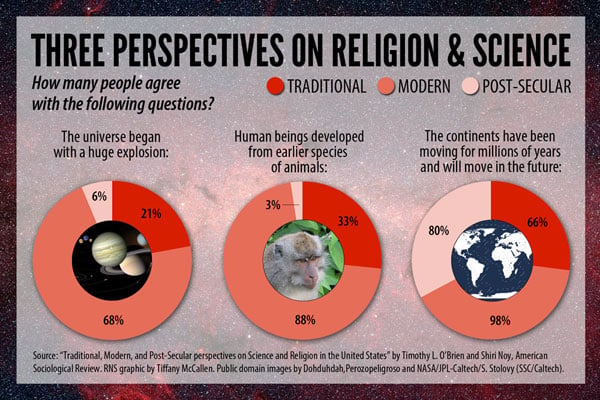 The universe began with a huge explosion:

The continents have been moving for millions of years and will move in the future:

“Post-Seculars are smart. They know what scientists think. They just don’t agree on some key issues, and that has impact on their political views,” said O’Brien.

When the authors looked at views on the authority of the Bible and how strongly people said they were affiliated with their religion, Post-Seculars put the most faith in Scripture and were much more inclined to say they were strongly religious. And where science and faith conflict on hot-button issues, they side with the religious perspective.

For example, Moderns are the most supportive of embryonic stem cell research and abortion rights for women, but Post-Seculars, who are nonetheless largely positive about science and society, are more skeptical in both areas, O’Brien said.

Where people fall in these three groups can predict their attitudes on political issues where science and religion both have claims, O’Brien said, even after accounting for the usual suspects — social class, political ideology or church attendance.