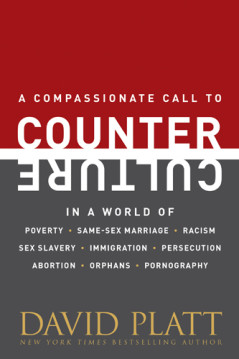 There’s a new trend with old roots taking hold in evangelical Christianity these days, and it can be seen everywhere from books to blog posts to sermons from famous pastors: the obsession with being counter cultural. Christianity, the logic goes, was founded on virtues that our contemporary culture does not prize, virtues like selflessness and humility and modesty and morality. When the New Testament mentions “the world,” it is most often talking about something negative; something that can corrupt—only in John 3:16 (“For God so loved the world…”) and a few other passages do we get any indication that the world might be a good thing for the Christian. The countercultural obsession has perhaps no better key text than Romans 12:2: “Do not be conformed to this world, but be transformed by the renewing of your minds, so that you may discern what is the will of God—what is good and acceptable and perfect.”

But the admonition not to be conformed has somehow been twisted into a mandate to be countercultural, and those who are countercultural (in only the way we want them to be!) are lauded as modern-day prophets and heroes. The pull away from “culture” (which some Christians seem content to define as “everything we’re against”) has become so strong that David Platt, author of the bestselling Radical, has just published a new book called Counter Culture: A Compassionate Call to Counter Culture in a World of Poverty, Same-Sex Marriage, Racism, Sex Slavery, Immigration, Abortion, Persecution, Orphans and Pornography. “Welcome to the front lines,” the Amazon copy reads. 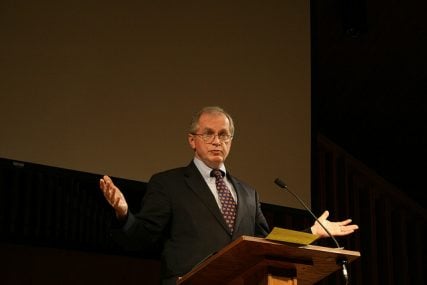 Last month a video from The Gospel Coalition made the Internet rounds and in it D.A. Carson, a Reformed theologian, said “When a whole culture is running in a certain direction, if we remain silent about [issues of gender roles] we are finally, however unwittingly, acquiescing and that is why it really is important for the Coalition to stand up to directions that are just so dangerous and so painfully unbiblical at so many levels.” It is precisely this kind of language—combative in its use of phrases like “stand up to” and “painfully unbiblical—that reinforces the narrative that evangelical Christians—especially the truly faithful complementarians—are a persecuted minority when, in reality, we are the ones in the halls of power.

Standing “against” the predominant culture is easy if you don’t know anyone in the predominant culture. Waving protest signs is easy if you’re part of a group that chooses to picket rather than engage. If you’re preaching to a bunch of people who think the same way you do, you don’t get any awards for reinforcing what they already believe. That’s not bravery; that’s an echo chamber.

There is a great deal of hand wringing about the church losing its countercultural status, as evidenced by a piece Rod Dreher wrote at First Things: “Some of us will live to see the day when orthodox Christians will be considered exotic antiques at best.” Dreher is arguing that, among other things, Christians should not look to politics for salvation, which is all well and good. But the assumption that Christianity has existed in such an unbroken and pure form for 2,000 years until our generation messed it up beyond recognition is so clueless as to be adorable. “There are no safe places to raise Christian kids in America other than the countercultural places we make for ourselves, together,” Dreher goes on to write. This kind of distorted thinking is what happens when you mistake being countercultural for a virtue in and of itself.

There’s another thing that happens when our aim is “to stand against” the detrimental effects of a (often nebulous) culture: We start to build walls where there should be bridges. When Rod Dreher writes that there is nowhere safe to raise children outside of the comfortable and sheltered spaces created by like-minded people, he is actually advocating for an incredibly dangerous position of groupthink that lets in only people who look and think like I do. That is privilege defined, and can lead down harmful roads of sexism and racism, among other things. The world doesn’t need to be safe in order for anyone to venture into it; Jesus certainly didn’t seem to think so.

The fruit of the Spirit—the traits that are meant to mark Christians—is “is love, joy, peace, forbearance, kindness, goodness, faithfulness, gentleness and self-control.” There are plenty of examples of these in the general culture, and plenty examples of their lack within Christendom. If we focus on the fruit, how we are perceived won’t matter so much. If we focus on how we are perceived, the fruit that follows will be sour for sure. If you aim for Christlike love, you may end up standing counter to the culture. But being countercultural is never the goal. Love is.