(RNS) Last Saturday (Feb. 21), Time.com broke the news that my evangelical publisher, Destiny Image, dropped a book contract it had made with me almost a year ago because its buyers refused to sell my book due to my pro-LGBTQ activism.

Many conservative evangelicals have called my pro-LGBTQ stance “deplorable” and labeled me a false teacher. Other progressives have uplifted my story as one that demonstrates the discrimination that too many conservative Christians have become known for. In all of this coverage, both positive and negative, though, the true message of my situation has gotten lost.

But at the heart of this controversy, there’s a deeper problem: a fundamentally flawed belief that one cannot be a true Christian if one identifies as LGBTQ (or an ally of LGBTQ people).

Evangelicals look to Romans 1 and see “men exchanging natural relations with women” for “unnatural” relations with men, and read that “the wrath of God” is being kindled against such things. The logic follows that anyone who seeks to have “unnatural” sex with a person of the same sex will spiral out of control, become a pagan idolater and ultimately face the wrath of God. If it really were that serious, then it makes sense that the response would be serious.

But there’s a problem. I identify as queer (which is why I add the Q to LGBT). For me, this means my sexuality is fluid. I could be attracted to a man or a woman; my sexuality ultimately defies the traditional labels of gay or bisexual. I’m open about this. I also am an outspoken advocate for LGBTQ equality, both in civil society and in the church. I do not believe it is a sin to be gay, and I regularly work with church leaders and other Christians to move them toward full inclusion and acceptance of LGBTQ people.

And in the midst of all of this, I am an evangelical.

Not just evangelical in name only, either. I believe all of the defining points of traditional evangelicalism: the centrality of the Bible, the centrality of the cross, the importance of activism and the importance of salvation and conversion. I love the gospel and am devoted to following Jesus with my whole life. It is because of Jesus and the gospel that I have come out and embraced my queer identity. It is because of Jesus and the gospel that I work for LGBTQ equality. I don’t fit the bill of Romans 1– I haven’t exchanged God’s truth for a lie. I haven’t worshipped created things instead of the Creator. In fact, I have never been more devoted to Christ and his word than I am right now.

And I am not alone.

Recent polling by the Pew Research Center shows that over 43 percent of millennial evangelicals support same-sex marriage. My friends Matthew Vines and Justin Lee run organizations that bring together thousands of committed Christians who also identify at LGBTQ or allies. Over the past six weeks, a number of evangelical churches have declared that they now fully welcome and accept LGBTQ people into the full life of the church. 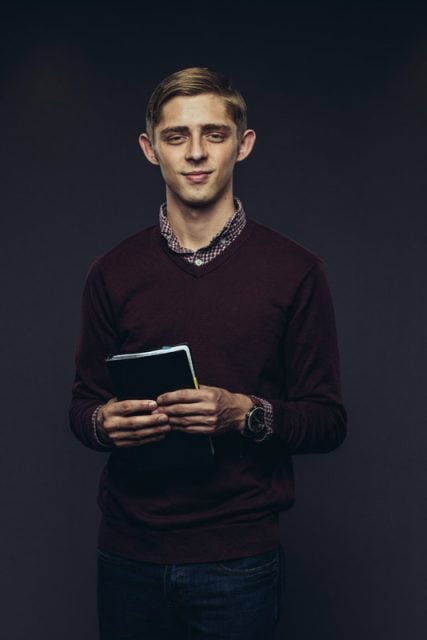 Each and every day, more and more LGBTQ people and our allies are coming out of a different closet — as evangelical Christians. And as more of us step out, the more we are sensing that the Spirit of God is powerfully working in our midst. The fruit that we are seeing coming from these churches, ministries and lives is abundant. We are seeing real lives saved. Faith is reborn in the hearts of many who never thought there would be a place for them at God’s table. Revival is breaking out among younger evangelicals, who are catching a glimpse of the new thing God is doing in our midst. In other words, we are seeing tremendous blessing, not wrath.

God is up to something bigger than we can imagine. And that something looks like hundreds of thousands of LGBTQ individuals around the world stepping out of their closets of shame and suffering and into abundant lives dedicated to the kingdom of God and the good of all people.

Along the way, we will face roadblocks much more severe than the one I am facing today. Yet we must continue to let our light shine before the world. We must continue to embrace our Christian identity as LGBTQ individuals and allies and show that the spirit of Christ is truly at work through us to redeem and reform the church. We must embrace the knowledge that God’s love is big enough for all of us, and find our sustenance in that truth. Because when we get a hold of that kind of radical, messy, all-inclusive, divine love, we will change the world for good.

After all of the dust settles around my book contract, I hope the message that emerges is this: I am queer. I am an LGBTQ activist. And in the midst of all that, I remain a deeply committed evangelical. And there is no contradiction there, no matter what evangelical bookstores and publishers might say.

(Brandan Robertson is an evangelical author, activist and speaker. He is the founder of The Revangelical Movement, director of The RISE Network and national spokesman for Evangelicals for Marriage Equality. Follow him on Twitter @BrandanJR.)