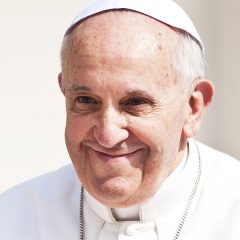 WASHINGTON (RNS) Everyone has a high opinion of Pope Francis. Well, almost everyone.

That nudges him nearly to a tie with the immensely popular St. John Paul II, who hit 93 percent on the favorability chart among Catholics after his 1996 U.S. visit.

The survey also shows Francis well ahead of the scholarly retired Pope Benedict XVI, whose favorability ratings among U.S. Catholics peaked in 2008 when he visited Washington, D.C., and New York City.

And among Americans in general, Pope Francis has a huge fan base six months before his own U.S. visit to those cities and Philadelphia in September. Pew Research found that 70 percent of the general public rates him favorably. Only 15 percent do not, and the remainder said they didn’t know enough.

The favorability percentage was lower among Americans as a whole because Protestants and people who claim no religious brand (“nones”) were less likely to check “favorable.” Still, the majority had a positive opinion of Francis, including:

(There were too few black Protestants among the 1,504 people surveyed Feb. 18-22 to include in the analysis, according to Pew.) Pope John Paul II, shown here in a still from the PBS show Frontline, is still the favorability-chart topper in a March 2015 Pew Research Survey.

Pope Francis has grown more popular in the two years since he was elected. The survey found that among Catholics, his favorability rating rose from 84 percent in March 2013. And for white mainline Protestants, the number was up to 74 percent (from 65 percent), while it held steady for white evangelicals.

For the “nones,” however, Pope Francis’ favorability ratings shot up up to 68 percent from a low of 39 percent.

The margin of error for the total survey is plus or minus 2.9 percentage points.